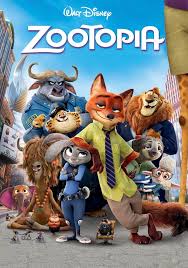 Ah, Zootopia. A place of peace, prosperity, and wealth. Where every creature, predator and prey, can peacefully live with each other without any fear at all. This ingenious community is lacking only one thing: humans. What would you do? This is the subject of the fairly recent Disney film "Zootopia", which I saw on Netflix some time ago.
​
Despite this admittedly interesting premise, the film definitely has some big problems. Right from the very first "follow your dreams" message as the young rabbit Judy Hopps struggles through a series of physical tests in order to put herself on Zootopia's police force, I knew I was in for a long ride. From there, it's a total mess of schmaltz, melodrama, predictability, clichés, crude jokes, and lots and lots of shamelessly sweet positive messages (which admittedly do have a place, but really just feel forced here) as both Judy and her new fox friend Nick Wilde race to solve a puzzling mystery that has plagued Zootopia for weeks. Sounds like the perfect movie to put on for the kiddies, right? As a matter of fact, due to the horrific behavior of the animals who get poisoned from a dart gun and go mad, it's actually quite scary/disturbing (especially for a PG-rated movie) at times, so don't ask me what kind of audience Disney was trying to aim for with this one.

​Anyway, the film does have its moments, particularly in the “mole gangster” scene (which obviously includes veiled references to The Godfather), but it's ultimately too childish to really be good as razor-sharp satire (which I'm guessing the filmmakers were aiming for here). If you like these kinds of Disney movies, by all means, watch it; otherwise. don't bother.