you don't mess with the zohan 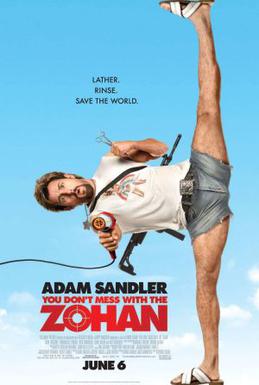 Will Adam Sandler ever quit starring in these kinds of raunchy, stupid, irritatingly sentimental “comedies”? All right, he has been in significantly meatier fare such as Punch-Drunk Love, The Meyerowitz Stories (New and Selected), and Uncut Gems–all of which were helmed by universally celebrated directors (Paul Thomas Anderson, Noah Baumbach, and the Safdie brothers, respectively), but otherwise, that's literally the only kind of movie people know him for.

However, when one of the kids at my church’s youth group told me that his lesser-known You Don’t Mess with the Zohan was really funny, and when I saw that Roger Ebert (inexplicably) gave that same film a positive review, I thought You know what? Maybe this one will be worth watching. After all, I thought Anger Management would be incredibly bad, and that actually wound up being pretty funny [even if, thinking about it now, the 7/10 I gave it should’ve been docked down to a 6 due to the stupid, stupid ending reveal], so maybe that will be the same case here as well, right? Wrong.

OK, I’ll admit it: the first 15 minutes or so were actually pretty decent. Sure, watching Sandler put on some heavy accent to play Zohan, an unbeatable-yet-idiotic Israeli counterterrorist that everybody loves even when he’s fully naked and sticking things up his rear end is, needless to say, ridiculous, but it was so much so that I really couldn’t help chuckling a bit. Then he sneaks away to New York to fulfill his dreams of being a hair stylist or something, and the laughter stopped–no, not just because of the eye-rolling “be yourself” message we all know is waiting at the very end, either.

For the record, edgy humor is something I don’t condemn (in fact, I am personally more fond of the original British version of The Office than the American one because of how hilariously boundary-pushing the former is–sue me), but not only did the crassly juvenile stuff constantly hurled at us after those promising opening scenes feel incredibly forced, it was frankly a lot more repulsive than funny.

How repulsive are we talking about here? Well, if Sandler doing incredibly gross and creepy things to old women while styling their hair (i.e. thrusting his groin area in their faces), then having extremely vigorous sex with them in the bathroom of the Paul Mitchell store he works in (not shown, but clearly indicated from how much stuff falls off a nearby shelf as a result), then repeatedly complaining about not being able to get an erection so he can do this (a later shot of it is one I want to permanently scrub from my brain) is what you personally find “really funny”, then your sense of humor is obviously very different from mine. Very, very, very different. In fact, it is probably very different from that of most other people as well. Or not, considering how much money these kinds of movies seem to make. Good for them, I guess.

Note: Admittedly, some more genuine laughs come in the form of three moronic Muslim terrorists whose idea of blowing up the aforementioned store is throwing a glob of Neosporin at it, which reminds me of a very well-received dark comedy named Four Lions. Come to think of it, I probably should have just seen that instead.

Note #2: And once again, the MPAA fails by granting this film a PG-13 since there’s no female nudity and the total amount of f-words is only 1 (well, 1-and-a-half), yet slaps an R on much milder films such as The King’s Speech since they break the latter rule. I am not suggesting that they give both films a PG-13, but that they create another rating in between the two that... all right, I don't need to go into detail about all of that since I already did so at the end of my Boyhood review, but you get the point. Hopefully.

Note #3: By the way, Mariah Carey (who cameos as herself towards the end) is just a terrible actress. Yes, her singing skills are amazing, but her acting skills... aren't nearly as good. Sorry, but it's true.