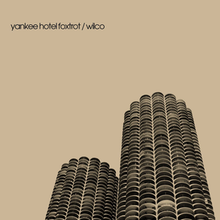 Previously known for producing relatively straightforward country/pop-rock, the indie band Wilco shocked their record label, Reprise, by heading in a completely different artistic direction with their fourth album, Yankee Hotel Foxtrot. Seeing no commercial value, the company suggested that it be drastically altered to make it more radio-friendly, which resulted in the band leaving Reprise altogether and releasing it under Nonesuch Records, where it became their first gold-selling album. While this fascinating story almost threatens to overshadow the album’s actual music, the latter is luckily more than interesting enough to prevent that from happening.

Arguably one of the most offbeat albums of the 21st century, Yankee Hotel Foxtrot mixes comparatively chart-aimed pop-rock darts (“Kamera”, “Pot Kettle Black”), stranger Radiohead-ish tunes (“I Am Trying To Break Your Heart”, “Ashes of American Flags”), and genuinely unnerving sonic experiments (“Poor Places”, “Reservations”). The songwriting, too, ranges from slightly deep (“There’s a war on war”) to just plain corny (“She fell in love with the drummer/she fell in love with another”). All of this makes for an extremely uneven (and occasionally confusing) listen that’s definitely not for casual pop fans.

However, despite its inconsistency, the album is still a truly unique gem that is the perfect antidote for all the lifeless bores on today’s Top 40 Radio, making this Yankee Hotel Foxtrot well worth checking into.

Note: I initially thought of this album as a 9/10, but upon repeated listens, I have become accustomed to the warm-yet-brooding atmosphere that somehow manages to make its slightly disjointed structure perfectly blend together into a seamless whole. As such, I will now give it a perfect score. You're welcome.