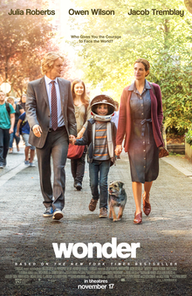 Way back before there was even a remote possibility of the book “Wonder” being made into a movie, I was already thinking about how interesting a film adaptation of the unique novel would be. One of the main things I remember thinking was that the film would have to at least be PG-13, due to the book’s mature theme of extreme physical deformity. Years later, when the movie eventually was made, I was a little confused at how such a relatively heavy book would get made into family-friendly PG-rated movie, especially considering that it presumably followed the source material. Watching it with my mom and sister, however, quickly yielded the answer: it didn’t.​

For those of you who don’t know, Wonder is about a boy named Auggie Pullman, who has a deformed face, that has to enter middle school for the first time. Lots of predictably gooey shenanigans ensue, which culminate with Auggie getting the school’s “Henry Ward Beecher” medal at the end of the year for being the school’s best student, even though he technically didn’t really do much more than any of the other kids, academics or otherwise. But then again, this is a family drama film, so of course it’s going to end that way. Believe me, that’s the least of the movie’s problems.

Admittedly, the film only has a couple of real flaws. First of all, if you’ve read the book, you know that it’s told from the perspective of multiple characters, which actually does a lot to branch out its world and hear what other characters have to say. However, that doesn’t really translate to screen well. In the film’s case, it will occasionally switch to the perspective of another character (indicated with a big title card on the screen), stay with him or her for about five minutes or so, then switch back to another character’s perspective without a moment’s notice or title card, which doesn’t really work. Finally, there’s Auggie’s face itself. As I said before, I fully expected a film version of the book to get a strong PG-13 rating, due to the graphic description of Auggie’s severely deformed face in the source material. However, in what was most likely an effort to please the MPAA and get a clean PG rating, Auggie’s facial deformity is extremely toned down to the point where it almost looks normal. This wouldn’t be so bad if everyone’s initial reaction upon first seeing him is as if his entire face was literally ripped off. It’s almost enough to make one wonder if it was hastily airbrushed last-minute to please the PG censors.

For the most part, though, this film is just your average overly emotional middle-school drama. In fact, it goes through the notions as if marking off some money-making executive's checklist. One-dimensional middle-school stereotypes, including unbelievably nice teachers and kids, as well as one typically mean bully who inexplicably turns nice himself at the end? Check. Plot structure so predictable, it’s laughable? Check. Tacked-on melodrama so blatantly geared to wring tears out of audiences, it’s almost boring? Check. A-lister actors whose performances feel more phoned in than anything? Check. Complete removal of the book’s grittier themes (overt detail of Auggie’s multiple surgeries is left out, as is the major plot point surrounding his hearing aids)? Check. Corny pop songs liberally sprinkled throughout (including the White Stripes’ “We’re Going To Be Friends” literally being used three times)? Double check. Oh yeah, and the aforementioned ending so ridiculously gooey, you half expect Sigur Rós’ “Hoppipolla” to start playing? You got it.

Look, this film isn’t as bad as I might have been making it sound. It’s cute, and it has a pretty good message as well. It’s just that considering the unusual subject matter dealt with here, I was expecting a lot more. Also, it’s not like the book was really groundbreaking by any means either. In short, if you’re looking for something harmlessly entertaining to watch on Family Movie Night, then by all means, check this one out. If you’re looking for something that will actually stick with you, however, then don’t bother.