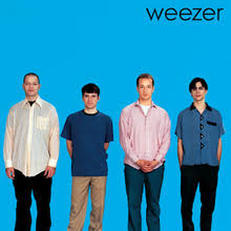 With their self-titled debut, which many fans know as The Blue Album, Weezer took an unabashedly positive attitude and a love for home-grown music and shoved it straight into the faces of doubtful critics and record buyers alike. Cheery tunes, accessible sing-alongs, and a consistently nerdy spirit both proved a musical gold mine for those tired of the recent onslaught of angry, downbeat punk and hip-hop posturing and definitely make it a contender for the happiest album of a very musically unhappy decade: the 1990s.

From the very first track, “My Name Is Jonas”, the band instantly set the tone for the entire album with soft-loud dynamics (something ironically borrowed from angsty grungers Nirvana, albeit with a slightly different tone), loud guitars, a moderate pace, and a titular protagonist borrowed from Lois Lowry’s classic book The Giver, which actually won the Newbery Medal in the exact same year this album was released. “No One Else” and “The World Has Turned And Left Me Here” follow pretty much along the same lines, but it was the breezy blast “Buddy Holly”, along with the woeful “Undone-The Sweater Song” and the honest, more personal “Say It Ain’t So”  that really catapulted them into the mainstream and proved them a true force to be reckoned with. Another highlight is the extended closer “Only In Dreams”, which effectively uses relatable lyrics and interesting hooks to unbelievably keep the listener’s attention over its entire 8-minute running time.

Unfortunately, like many other albums of this sort, the Blue Album occasionally suffers from corny songwriting and boring, sometimes even monotonous instrumentations, particularly on the clichéd underdog tale “In The Garage” (which perplexingly kicks off with a harmonica), the perfect-vacation fantasy “Holiday”, and the surfer anthem “Surf Wax America”. However, the album’s biggest flaw in general is that its ultimately too shallow to really delve into any sort of deep, meaningful, or even memorable introspections or confessions. In fact, the whole package is really so safe and lightweight that it might even be tempting to write it off as nothing more than geeky, innocent kids’ music, which very well might be the case at times.

​Despite all that, however, Weezer’s debut is still a fairly solid, up-tempo listen for when you really don’t feel like listening to anything else or when you want some nice background music while you’re doing your homework. In fact, this release is genuinely straightforward when compared with some of the other albums in their catalog, some of which inexplicably cross over into full-on dance-pop. In short, despite its flaws, if you only buy one Weezer album, this is it.

Note: As with Wilco's Yankee Hotel Foxtrot and Coldplay's A Rush of Blood to the Head, in the months after I wrote this review, my opinions on the album have drastically changed for the better; in fact, even the weaker tracks are still incredibly good. In fact, only Pinkerton prevents it from being the band's absolute best. Kind of a controversial opinion, I know, but it's still one I firmly stick by nevertheless.