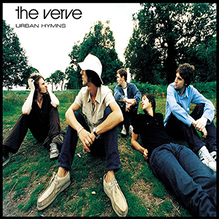 The main reason The Verve’s third album, Urban Hymns, has received so much praise and recognition from mainstream audiences is because of its opener, “Bitter Sweet Symphony”, which instantly became the band’s signature song and most recognizable tune thanks to its world-weary lyrics (“‘Cause it’s a bitter sweet symphony, this life/Tryin’ to make ends meet, you’re a slave to money than you die”) and soaring strings lifted straight from an orchestral version of the Rolling Stones’ “The Last Time”. Even if the lawsuit over that particular sample tends to soak up all interest in the song (especially since it resulted in all of the song’s royalties being handed over to the Stones, who actually relinquished them a few months ago), it is still an indisputable classic nonetheless.

Unfortunately, the entire rest of Hymns finds the band sounding way too much like Be Here Now-era Oasis (not a good thing) while not coming up with anything nearly as good as that timeless hit, which is especially annoying since the entire album is more than an hour long. However, the lovely “Sonnet” and disillusioned “The Drugs Don’t Work” are a couple unexpectedly good hidden highlights, though aimless bores such as “Catching the Butterfly” and “The Rolling People” find them repeating themselves to no avail–and that’s only on the album's first half.

Granted, Urban Hymns isn't awful (in fact, it's actually really good overall), but when compared with giants such as Oasis and Blur, it ultimately pales, even with "Bitter Sweet Symphony" in its arsenal. Even so, you still could certainly do worse when looking for some good Britpop to help lighten up your day.