system of a down 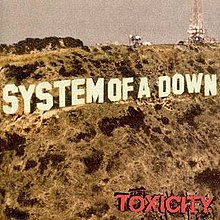 Most nu-metal groups have gained a reputation for being loud, hard, and violent, with disposable lyrics about adolescent rage being the forefront of pretty much all their songs. Though many notable bands have broken this rule, System of a Down is slightly different than the rest. Unlike the radio-friendly rap-rock hits of Linkin Park or Incubus, System of a Down mostly focuses on political issues in their music while still keeping the same heavy grind that has captivated fans everywhere.

On Toxicity​, the band touches on prison overcrowding ("Prison Song"), the controversial 2000 election ("Deer Dance"), and even Charles Manson ("Atwa"), just to name a few things. While some of these arguments may be a little too preachy and forceful at times to be really effective or persuasive, the music is luckily enjoyable enough to compensate, even if it can get a little annoying at times. However, Serj Mankin's distinctly Asian cod-opera vocals admittedly can get pretty tiresome after a while, especially when he's randomly ranting about sex ("Bounce"), drugs ("Psycho"), religion ("Jet Pilot"), and pretty much everything else.

Overall, though, while the album ultimately lacks some of the hooks and strong songwriting of other nu-metal groups around the time, it does boast the controversial hit "Chop Suey!" and the melodic “Aerials”, both of which stand among the band’s best songs and make it well worth listening to.