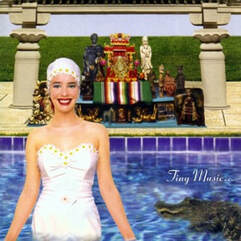 If you're a big music nerd like me, you've probably had one of those albums that you impulsively buy and completely forget about for the next several months or so only to finally dig up one day out of morbid curiosity, and while not the only one in my collection that fits that criteria, I can safely say that Stone Temple Pilots’ Tiny Music… Songs from the Vatican Gift Shop definitely surprised me the most with how unexpectedly great it was. All right, maybe “great” is far too strong a word for this alt-rock band’s troubled third release, but it sure comes close at times.

Shifting into a much cleaner, more pop-friendly sound, STP almost completely break away from the heavy grunge of their previous two albums, and this musical shift is a big relief, given how many bands (including, ironically enough, the Pilots themselves; their very next release, No. 4, is about as creative as its title) annoyingly tend to basically go on autopilot since they apparently don’t care how boring or lame their music is as long as it makes a few bucks or so. However, though I’m all for this risk-taking and experimentation, at the end of the day, not much of Tiny Music really left that much of an impact on me. Yes, the radio hit “Trippin’ on a Hole in a Paper Heart” is fantastic, and most of everything else is decent enough, but “Art School Girl” is annoying, and “Pop’s Love Suicide”’s repeating of the title just feels aimless and pointlessly “edgy”.

I am willing to cut the band some slack with those flaws, though, considering that the album was made while its lead singer/songwriter, Scott Weiland, was still struggling with drugs (substances that ultimately-and very unfortunately-killed him) while under a one-year-long probation sentence after being arrested for cocaine and heroin possession; in fact, with that being taken into account, it’s actually a lot better than it could’ve been. If anything, though not quite as undeservedly bashed as that album, Tiny Music is essentially STP’s One Hot Minute, what with its fairly good material coming from a band struggling so much with personal problems that it’s a sheer miracle they even made anything at all. So what if it’s no Core or Purple? This is still the last gasp of classic Pilots regardless, and the '90s were made all the better with it.