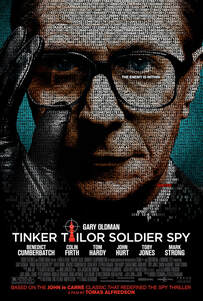 In my reviews of Chinatown and Argo, I praised both films for having actual plots and dialogue rather than the bullets and explosions most likeminded “thrillers” these days only have going for them. From that, you might have come to the conclusion that I’m more into slower, complex films than fast and over-the-top ones, and while I certainly don’t mind watching the latter now and then, you otherwise wouldn’t be too wrong on that account. However, can really slow and complex material sometimes get too slow and complex for its own good? Tinker Tailor Solider Spy, while a good film overall, answers that question.

In October 1973, the head of “The Circus” (British secret intelligence), “Control”, sends agent Jim Prideaux to Budapest to meet a Hungarian Army general wishing to defect, only for this spy to be shot by Russian agents trying to capture him. Some time later, George Smiley, the right-hand man of the now-dead Control, is brought out of the retirement he was forced into as a result of this incident in order to investigate claims that somebody in The Circus with a senior role is actually a Russian mole. Sounds relatively simple, right? Wrong.

If you loathe movies that are extremely slow or have plots that are virtually impossible to follow, then I suggest that you stop reading this review right now and watch something else instead, as Tinker undoubtedly fits in both categories. The film timeline and events zigzag all over the place for the sake of suddenly showing/bringing up seemingly random things or events that aren’t important at first but obviously are later, while just about everything drags at a molasses-slow pace that allows the story’s elements to really be developed, but also precariously skirts the fine line between introspective and just plain boring. Some people have said the former is the case because squeezing everything from the ultra-detailed book and BBC television series the film is based on into a mere two hours just doesn’t work too well, and while I can’t offer my own opinion on that since I haven’t read the former or viewed the latter, I certainly do see why this could be the case.

And yet, even with all that, I still found myself really liking Tinker nevertheless. Why, you may ask? Well, in the words of the immortal Roger Ebert: "'Tinker Tailor Soldier Spy' looks, sounds and feels exactly right", be it the crisp cinematography, refreshingly still–and occasionally even distant–camerawork, appropriately gloomy atmosphere, compelling–if obviously overstuffed–story, multi-layered characters, suspenseful buildups, shocking narrative twists, and startling ending. Even the film’s more difficult aspects above get much easier to swallow, once you pay extremely close attention. And watch it a few more times. I know I will.