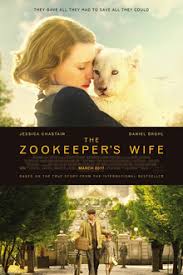 ​There are some cinematic dramas out there (The 400 Blows being a great example) that actually don’t use schmaltz, melodrama, or clichés in an unsuccessful attempt to wring tears out of it’s passive audiences. Unfortunately, the 2016 historical drama The Zookeeper’s Wife is most definitely not one of those types of films.

The movie kicks off in Warsaw, where the Zabinskis own the local zoo. When the Nazis invade, bombs literally blow the zoo to pieces and all the animals are either gunned down or taken prisoner. With no furry friends left, save a rabbit or two, the Zabinskis despair. Then the zookeeper’s wife (hence the title), Antonina Zabinska, gets an idea. With some help from her husband, she decides hide the remaining Jews from the Nazis in her leftover animal cages, providing them food and water every day and even letting them roam the house when the Nazis are gone. However, soon enough, though, the head Nazi zoologist, Dr. Lutz Heck, starts to get suspicious about what REALLY goes on at the Zabinskis’ quaint little zoo.

Despite this unique and suspenseful premise, the film’s ultimate purpose is unfortunately to make you cry with all its gooey sentimentality rather than tell a gripping true-life story, which is especially obvious in the ridiculously over-sentimental scene where Antonina manages to cheer up a traumatized little girl with a baby bunny. Granted, the acting is admittedly pretty good (Jessica Chastain and Daniel Brühl deliver top-notch performances), and I will give the film credit for not shying away from or sugarcoating the horrors of war and the Holocaust. But still, for a movie touching on those subjects (the Holocaust in particular), it sure could’ve been a lot tougher and edgier.