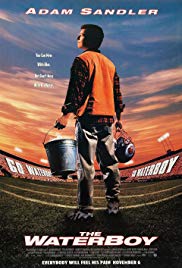 Because You Don’t Mess with the Zohan apparently wasn’t enough to satisfy his Adam Sandler craving, my dad decided to have his Friday Movie Night pick be his more well-known sports comedy (“comedy” being used very loosely, of course) The Waterboy. And if you think that for Adam Sandler, “more well-known”—it unbelievably grossed $190 million against a $23 million budget—means “better” (at least, with the kind of goofy, cheesy stuff he’s known for, not his much more well-received serious work), you obviously don’t know anything about him.

Of course, I still went in hoping it would be good and funny and that it would exceed my expectations and blah blah blah, but I just knew that it was going to be pretty lame. I was wrong: it was worse than that. Way worse. Proof: Sander’s character, a waterboy for the University of Louisiana’s football program, talks in a horribly abrasive nasal whine of an “accent”, and the rest of the characters range from “poorly written” to “lobotomized”.

Even worse, the film doesn’t find anything clever to do with that at all, and instead opts to bury everything in an extremely predictable plot that finds this waterboy trying to achieve his dreams of football stardom despite all the efforts of his overprotective mama (Kathy Bates, who’s just charming enough to enlighten this junk like James Earl Jones did for Field of Dreams, another sports film loved by many for some inexplicable reason) to push him in the opposite direction. No points for guessing everything that happens next, and I do mean everything.

Perhaps the most troubling thing about The Waterboy, however, isn't the painfully pedestrian plotline, or the cloying sentimentality forced onto the entire third act, or even the lack of any laughs whatsoever (all right, I guess I chuckled once when Rob Schneider's character yelled “You can do it! Cut [some bully's] f—king head off!”, but that was about it), but the fact that the sheer mean-spirited glee it takes in mocking Southerners and the mentally handicapped (including the titular character) just doesn’t fit with its ooey-gooey lightheartedness at all, turning an already bad movie into one practically reeking of confusion and misjudgment. The single saving grace here? The fact that there’s at least not as much of the pointlessly crass/sexual “gags” that very nearly ruined the otherwise kinda-funny Zohan. Thank goodness.