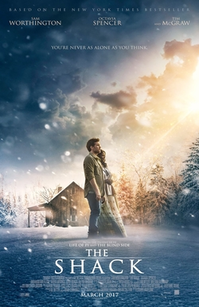 Around March of this year, through her subscription to the PureFlix channel (which she doesn’t have anymore since her credit card had to be terminated after somebody hacked into it), my mom made me sit through a super-cheap-looking faith-based film from 2010 called The Encounter, which followed five random strangers as they holed up at some random diner that–surprise!–winds up being run by none other than Jesus himself. The reason I am bringing it up here is because 2017’s The Shack is a lot like that particular film, only with the plot this time being a grief-stricken man, Mack (Sam Worthington), running into three people representing the Holy Trinity–you know, God, Jesus, and the Holy Spirit–near the very same shack where his youngest daughter, Missy, was brutally murdered in.

Given a premise like this, it’s no wonder Peter Sobsczynski, writing from RogerEbert.com, stated in his review that the film “somehow manages to be too innocuous and too off-putting for its own good”, but by the (very low) standards of the genre, it surprisingly isn’t that bad, all things considered. Yes, there’s all the preachiness, annoyingly overdone schmaltz (as with The Case for Christ, we get the same “emotional” music playing over nearly every single @#$%^&* scene), and painful predictability you’re expecting from something like this, but with it also comes a surprisingly decent look at grief and loss, topped off by the beautiful cinematography and solid acting. Additionally, the first 40 minutes are especially good in how much of a great setup for a better film they could potentially be. If only there weren’t so many gigantic holes in both the film’s plot and sense of logic to deal with after that.

No, I’m not talking about God’s human form saying he (or rather, she, as he inexplicably takes the form of a black woman) likes Neil Young to be more “relatable” despite that particular artist being pantheist and penning this song, but the whole thing with Mack murdering his dad. Yes, you read that right. Towards the very beginning of the film, we see a very young Mack pouring strychnine in his father’s drinking bottles in retaliation for him being so abusive both towards Mack and his mother, yet whether this plan actually worked or not is never said. Even more confusingly [SPOILER ALERT], Mack’s father, despite never previously being shown as religious in any way, later shows up as an angel and begs Mack to forgive him for what he’s done, never mentioning anything about the (attempted?) poisoning beyond an extremely vague “I forgive you”. The message: if you murder somebody who’s being mean to you, they will not only go to heaven, but also become a whole lot nicer due to your actions! Hooray!

And then there’s the matter of Missy’s murder, which we see through the discovery of her torn red dress next to some blood. Although that shot implies that what the killer did to her in the shack was quite gruesome, when [SPOILER ALERT #2] Mack is led to the body by the aforementioned Trinity, it not only looks completely undamaged, but is also neatly propped up on a rock in an underground cave, albeit with no clothes on*. So much for really making sense there either.

In general, though, as I already said beforehand, this is a surprisingly competent faith-based film that looks good, feels good, and generally goes down very nicely. Not particularly great, mind you. Just… very nice. That’s all. Not that I’ll blame anybody outside the religious crowd for giving The Shack a pass, but if you do like these kinds of movies, then by all means, disregard the below rating and watch this one ASAP. Trust me–you could do a lot worse (coughcoughcough leftbehind2014 coughcoughcough).

*[SPOILER ALERT #3] Even more confusingly, according to its Wikipedia article, the book this film is apparently based off of had Mack leading police to the body afterwards and using forensic evidence from it to arrest and convict the killer. However, the film itself just has Mack and the Trinity giving the body a proper burial in the garden, which is very nice and all, but doesn't prevent this person from murdering any more little girls at all. Too bad for them, I guess.