the perks of being a wallflower 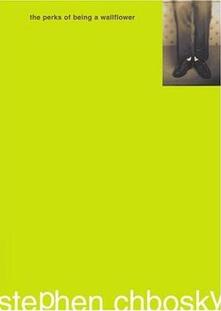 To celebrate this year’s “Banned Books Week”, I decided to read Stephen Chbosky’s acclaimed coming-of-age novel The Perks of Being a Wallflower, and truth be told, I was specifically waiting until then to do that as my reasoning was that it would be a lot more fitting that way. And admittedly, the material that made it a “banned book” was most likely just put in there so it could be, well, a banned book (more on that later), but either way, I am honestly really glad that I waited until I was 16 to finally pick it up.

Perks’s story is told through a series of letters from the early 1990s written to an anonymous “friend” from Charlie (the name he decides to call himself because he doesn’t want the person he’s writing to finding him or anyone close to him, who he also gives “generic names”, for some reason), a teen preparing to start high school while still reeling from the recent suicide of his one of his other friends, Michael. Over the course of that one school year, he breezes through assigned books, struggles through relationships, takes part in frequent student reenactments of The Rocky Horror Picture Show, and inadvertently gets involved in lots of complicated events involving both his peers and family– all while trying to get together with the girl of his dreams, Sam.

Unfortunately, though he thankfully has a good heart and always tries to do the right thing, Charlie himself really wound up bugging me a lot more often than not, which especially sticks out like a sore thumb since he’s the book’s main character. Look, I get that he’s mentally challenged and all, but him literally crying about nearly everything and doing extremely cringe-worthy things such as telling Sam about the wet dream he had about her and then starting to cry about that as well (so much for social skills) just gets distracting, and not in a good way.

Speaking of wet dreams, that’s not the only thing in Perks that has outraged parents enough that they tried–unsuccessfully–to pull it from their nearby schools: there’s also lots of casual teen drinking, pot and cigarette smoking, and (presumably unprotected) sex, all of which is morally ambiguous at best and subtly glorified at worst. Maybe this was to feel relatable to teens doing the same things (after all, the fairly recent faith-based flick Run the Race had a scene featuring adolescents swigging from cans of beer with no repercussions), but it still comes off as a bit gratuitous anyway, as does a pointless, overly graphic rape scene towards the beginning.

Considering how much stuff I’ve complained about by now, you’d think that I’d absolutely hate the book. And yeah, I admittedly almost did at times (not only due to the things mentioned above, but also due to annoyingly "meaningful" quips such as "We accept the love we think we deserve" or "I feel infinite"- whatever the hell that means), but the painfully realistic characters (the gay couple desperately set at all costs to keep it in the closet, the sister continuing to see her boyfriend despite being punched in the face by him, and our hero– a troubled freshman trying to be a good person even though he’s not quite sure what that really means) really hit home with me, and all of their wild, unpredictable rollercoaster lives were touching and compelling enough in equal measure to ultimately help redeem it.

Imperfect as it may be, The Perks of Being a Wallflower still edges just close enough to being an authentic YA semi-classic for me to recommend it to other older teens, though your personal tolerance of it probably depends on how much you can handle its flaws and dark/crude subject matter.