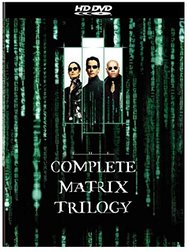 These days, it seems that everywhere you turn, technology is always there. The TV. The computer. Your phone, even. But what if the programs that drove these objects took the shape of human beings, poised to control or even kill you? Actually, what if it was a step further? What if, instead the computers being your servant, you actually served the computers, locked in an impenetrable virtual world where you unknowingly carried out your daily tasks while really unconscious and hooked up to wires that not only maintained the illusion of your daily life, but even fed off you to provide power to an apocalyptic wasteland that is the real world? This is the question that The Wachowskis brilliantly answered in their hugely successful Matrix trilogy, which includes the excellent The Matrix, the enjoyable sequel The Matrix Reloaded, and the extremely disappointing finale The Matrix Revolutions.

The riveting first film follows Neo, a computer hacker who suddenly finds out that he is actually living in a virtual world called the Matrix and given him the choice of a blue or red pill, the former of which lets him keep on living in an illusion and the latter of which places him in the unknowledgeable terrors of the real world. Needless to say, he takes the red pill, wakes up in a man sized pod with all sorts of wires connected to him, disconnects the wires, and joins Morpheus and Trinity on a spaceship in their desperate battle to save humanity from the Matrix, all while protecting their ship from these creepy giant bug-looking machines. This eventually culminates in a fantastic fight between him and an evil entity called "Mr. Smith" in a train station, which just about blew my mind the first time I saw it. Additionally, the plot ends on such a satisfying note that it’s pretty hard to see the need for any sequels at all. In fact, if it weren't for the fact that it soon became the highest grossing R-rated film in history, there probably wouldn't have been.

First, let me just get this out of the way. The Matrix Reloaded has barely no plot at all, period. OK, I guess there’s a very loose thread involving Neo, Trinity, Morpheus, the entire crew, and their continuing fight with the Matrix’s ultimate baddies (including Mr. Smith and his hundreds of thousands of clones), but that’s pretty much it; unless, of course, you count the budding love interest between Neo and Trinity, which is explicitly defined in an extended sex scene (the first-and only-of the series). In any case, though, this particular entry earned over $742 million worldwide, shattering the standards set by the first one. Even the critics were still positive, with Roger Ebert going so far as to state that the film is “a triumph over the original”. Though that most definitely is not the case, The Matrix Reloaded's nonstop action at least makes it pretty fun to watch, even if it's not nearly as groundbreaking or compelling as its predecessor. As a bit of a side note, while I won’t say what happens, I will say that the second one ends on a major cliffhanger, with a “to be concluded” flashing across the screen, therefore forcing you to watch the poorly executed The Matrix Revolutions.

That particular film kicks off with Neo stuck in a train station that’s somehow between the real world and the Matrix, which he is eventually rescued from by Morpheus and Trinity. However, all of them more or less disappear entirely after that in favor of a bunch of over-the-top (and surprisingly gruesome) fights with the aforementioned gigantic metal bugs, which is by far the film's biggest flaw. Don't get me wrong, I think at first glance, it might actually seem refreshing to put most of this particular entry in the real world (as opposed to The Matrix Reloaded, which mainly took place in, well, the Matrix), but this winds up leaving virtually no room for anything resembling character development or an actual plot. Of course, the climatic battle between Neo and Mr. Smith is kind of cool, but at that point, it unfortunately fails to save an otherwise boring finale. See it if you must, but prepare to be left scratching your head at how something that started out so fresh and invigorating ended with such a whimper.

Even so, the original Matrix film was so mind-blowing and influential, it has been practically engrained in the minds of the general public by this point. If nothing else, that’s the reason why, even after the 18 years now since it was released upon an unsuspecting public, we will still remember this groundbreaking-if not entirely perfect-trilogy for decades to come.