the imaginarium of doctor parnassus 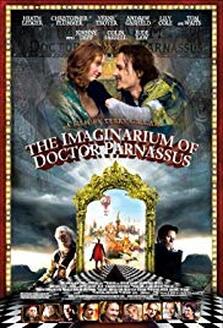 When looking at this lesser-known picture by former Monty Python’s Flying Circus member turned acclaimed director (Time Bandits, Brazil) Terry Gilliam, it’s impossible not to take into account the production difficulties caused by the sudden death of star Heath Ledger. The fact that Gilliam managed to not only pull through this tragedy, but also complete the film even after that (three other people, including Johnny Depp, wound up playing his character) is nothing short of incredible. Unfortunately, this unexpected backstage drama is actually a whole lot more memorable than the film itself- which isn’t to say that it’s completely awful. But still.

The Imaginarium of Doctor Parnassus, which makes about as much sense as its title, follows a small traveling circus run by the titular man that finds itself in unexpected danger when a deal he literally made with the devil-yes, you read that right-to collect more souls for him goes bad and an unknown man hanging by a noose is taken in and somehow revived. Obviously, I can’t describe any more for fear of spoiling anything, but needless to say, as with most other Gilliam films, things get pretty weird.

As eye-catchingly intriguing as the film’s plot may sound (and eventually is), its overlong length (I don’t want to sound like Sid Sheinberg trying to censor Brazil here, but this seriously needs some editing), extremely disjointed plot, and-I really can’t beat around the bush about this-bizarrely boring execution (scenes upon scenes, especially in the first half, where virtually nothing of interest happens at all are alarmingly frequent) mar its unique premise. However, the endlessly entertaining parts taking place in the stunning fantasy worlds (literally) behind a magic mirror finally allow Gilliam to get visually creative the way he did with some of his earlier works, and is easily the best thing in the entire movie.

Ultimately, though, how much you like Doctor Parnassus will most likely depend on how much of a true Gilliam fan you are. If you are a really big one, you might very well enjoy the offbeat story and obvious callbacks to Monty Python. If you aren’t, well... you’d probably be better off watching a classic episode of that particular show instead.