the hunt for red october 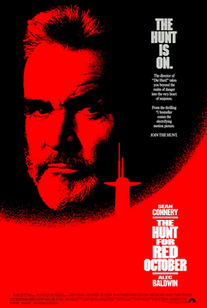 Let’s face it: thrillers are pretty much dead at this point. Well, at least the type that were a lot more focused on building up Hitchcock-esque tension and atmosphere than constantly filling the screen with explosive action. At least we got one more of them at the very beginning of the 1990s before the genre more or less died for good: The Hunt for Red October.

When the US government spots a Russian nuclear submarine coming towards American shores, the first thing that shoots through their minds is that the person running it, Captain Marko Ramius (Sean Connery, in one of his later roles), plans to attack the country. However, he’s actually using the Red October in a last-ditch opportunity to defect along with his most trusted crew, though only a lone CIA analyst has any notion of this–knowledge he must use quickly, considering that an American sub intended to blow the massive weapon to pieces is hot on its trail, as is Russia’s entire air and naval commands.

Even if the plot ultimately winds up being a little too predictable to really carry that much weight in the end, it is still extremely compelling-if a bit complex (especially for children, who are extraordinarily disserviced by the ridiculous PG rating)-throughout, making for what is probably one of the best Tom Clancy adaptations ever. I know that’s a pretty bold statement, given that I haven’t actually read any of his books or seen any other films based on them, but it’s still one I hold very firmly nevertheless. Though the gripping subject matter and top-notch acting obviously both big pluses, what really makes the film a criminally neglected near-classic is the realistically edge-of-your-seat way everything plays out right before your eyes without ever resorting to groan-worthy clichés or stereotypes. In short, if you’ve been bored with the same old dull violence and tiredly recycled tropes for years on end, then this film is an absolute must-see.