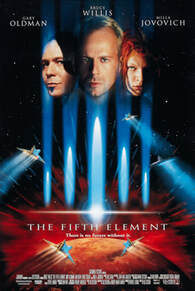 Although I have obviously seen quite a bit of films on my own, my favorite way of watching them is with my dad, mainly because I love discussing them with him afterwards. While for the most part, these are movies that I have picked out myself or, at the very least, had been waiting forever to see, The Fifth Element was a rare exception.

Despite my dad constantly pestering me to watch it with him for a while now since it was something he really enjoyed-though didn't quite love-when he first saw it with my mom, it just didn't really pique my interest, and thus, I ignored it. However, when Dad took off work for Labor Day, I decided to take the opportunity to finally see it with him, mainly just so he could stop bugging me about it. As it turned out, I actually wound up really enjoying it, though admittedly left a little disappointed at how much more fully realized it could have been.

Though the ominous opening scene takes place in 20th century Egypt, the film's plot is really kicked off 300 years later, when a woman created from the remains of a crashed spaceship's alien inhabitants breaks out of a medical lab and literally crashes into the life-and (flying) car-of taxicab driver Korben Dallas, who helps her hide from the police (and others) as they both race to save the entire planet from evil forces, which take the form of a massive fireball-looking thing for some reason.

As you might expect from a plot like that, The Fifth Element is fast, funny, appropriately over-the-top, and ultimately enjoyable enough to warrant watching if you need something mindlessly entertaining to put on to pass the next two hours or so. As such, it admittedly doesn't explore irs inventive premise, concepts, and visuals as much as it really should, resulting in it being a fun, yet slightly forgettable summer blockbuster that pleases audiences without challenging or surprising them in any way. Granted, by the standards of most of these types of films, The Fifth Element is simply mind-blowing (especially since its director, Luc Besson, wrote the original script for it when he was only 16 years old), but it still just feels like kind of a missed opportunity nevertheless, albeit a pretty entertaining one. In fact, that entertainment factor is what ultimately justifies me giving the film the below score.