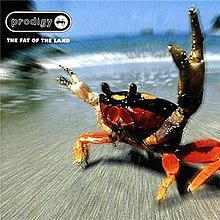 The last thing anyone expected from the relatively benign electronic dance group The Prodigy was to be inciting controversy. But that's exactly what happened when the newly renamed Prodigy (though just for the sake of remaining consistent, I will continue to call them The Prodigy) released their 1997 album The Fat of the Land, which contained both the appropriately named "Firestarter" and the no-explanation-required "Smack My Bitch Up". The uproar grew so big, the entire album was eventually pulled from Wal-Mart's shelves.
​
However, if you look past the controversy, The Fat of the Land reveals itself to be one of the 1990s most exciting albums. In fact, the entire package sounds like the soundtrack to the perfect action movie, driven by engaging samples, madcap beats, and Liam Howlett's venomous vocals. Even the relatively slowed down tracks "Breathe" and "Firestarter" still have an air of violent energy to them. In short, the album is leaner, meaner, tighter, and edgier than anything The Prodigy (or the whole big-beat movement, for that matter) had ever done before, or would ever do since. And that's exactly what makes it so irresistible to listen to, even after all these years have passed. If you're looking for something to get revved up to (and aren't easily offended), this is the album for you.