the end of the tour 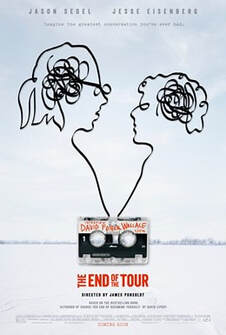 The brief friendship between David Foster Wallace (Jason Segel), a best-selling author struggling with personal issues, and David Lipsky (Jesse Eisenberg), a Rolling Stone journalist floored by his latest novel, that took place when the latter interviewed the former on a promotional book tour isn’t one that seemed very likely to be told.

In fact, had the real-life Lipsky not written a book about it (Although of Course You End Up Becoming Yourself, published in 2010), it might not have even wound up on the big screen in the first place. Now it has, and what could have been schmaltzy, clichéd, or just plain forgettable in other hands is transformed by director James Ponsoldt (Smashed, The Spectacular Now) and screenwriter Donald Margulies (a Pulitzer prize winner for his 1998 play Dinner with Friends) into something far, far better than that.

When Lipsky and Wallace first meet, it’s immediately clear that the two have superb chemistry with each other, and these early scenes, though occasionally filmed with a “shaky cam” effect that gets distracting, are just an absolute joy to watch. As their relationship progresses, however, it’s clear that things aren’t all well in Wallace’s life, and when Lipsky starts probing into that, it leads to some of the most genuinely heartbreaking scenes I’ve seen in a long time.

And yes, I do mean “genuinely”--Ponsoldt never uses these emotional moments to cheaply manipulate viewers, and the characters were played with such conviction that I never once believed they were anything else. So why did audiences all but ignore such a powerful, affecting film? You tell me. No, seriously—I really do not know.

In fact, two days after seeing it, I am still baffled as to how it only made back its $3 million budget in the box office. It stars Jesse Eisenberg, a fantastic actor who already starred in extremely well-known titles like The Squid and the Whale, Zombieland, and the fantastic Facebook origin story The Social Network. A24 distributed it, and they’d already gotten popular off of modern cult classics such as Spring Breakers, Enemy, Under the Skin, and Ex Machina. Additionally, it told a true-life story that admittedly does sound a bit familiar at first, but was delivered so powerfully that that didn’t even matter one bit.

All the stars were aligned, but somehow, those great ingredients just didn’t work with the general public. I guess that puts The End of the Tour in that special list of “criminally overlooked films that really need to be seen by a lot more people”. If so, it’s very high up on there.