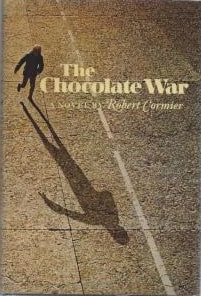 Normally, when a book carries a name as cheerfully innocent-sounding as The Chocolate War, it tells a similarly lighthearted tale of friendships, rivalries, and the joy of making and eating such tasty treats. However, those picking up said book expecting something along those lines should prepare themselves to instantly be greeted with a cold slap across the face.

Although wisely giving ample time to several different characters, the novel generally focuses on the troubled Jerry Renault, who boldly refuses to participate in the annual chocolate sale his all-male Catholic high school strongly encourages (read: practically forces) all of its students to do. Unfortunately, this arouses the ire of both the cruel vice-headmaster (in name only; the real principal’s sick in the hospital, leaving him in charge) Brother Leon and the school’s secret society/real dominating force The Vigils, resulting in tensions flaring, barely veiled embarrassments leading to violent retaliation, and Jerry finally learning the sad answer to the question the T.S. Eliot quote on the poster in his locker poses: “Do I dare disturb the universe?”

Undoubtedly one of the darkest books ever targeted at YA audiences, The Chocolate War has literally been challenged at (if not outright banned from) schools over two dozen times for its often brutal content, including one plot point involving a sexually explicit photo that doesn’t even exist effectively being used to blackmail its subject. Granted, none of that is really surprising considering that the book’s author, Robert Cormier, soon wrote another novel geared towards teens (After the First Death) in which terrorists hijack a school bus filled with little kids and wind up accidentally killing one of them. However, what ultimately makes The Chocolate War worth picking up is the hard look it takes at the real life of seemingly ordinary schoolboys, as well as the truly disturbed thoughts and feelings that pervade some of these individuals’ minds. Additionally, the gripping writing and grimly realistic characters are simply superb, getting under your skin more than the average horror movie and leaving you feeling thoroughly shaken and unsettled long before it's finally finished.
​
As such, the novel is definitely not recommended for anyone expecting anything uplifting or “feel-good”, and will probably prove too much for some with its unrelenting nihilism and noticeable lack of any helpful solutions. Nevertheless, it is still is a darkly essential teen classic, if one that you will never see any parent groups backing up. Oh, and in case you didn't think the first book was dark or disturbing enough for your tastes, the admittedly inferior sequel Beyond the Chocolate War is an interesting, albeit inessential, read for fans of the first one.