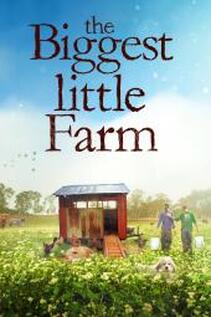 Though it admittedly is (much) more of my mom and sister’s gig than it is mine, we all help take care of our very own miniature farm at home. As such, when my mom first heard about this movie, she absolutely had to see it, even pre-ordering the DVD so we could all watch it together for our own Friday Movie Night. I personally thought it looked boring, but thought it would be nice to at least be a good sport and view it with everyone else. Predictably, my mom and sister were entertained the entire time, my dad was too immersed in his online chess game to even pay attention, and I… well, you know.

The film chronicles the story of John and Molly Chester, a married couple who decided to just abandon everything they had ever known to move out to the countryside and start a massive farm. Of course, things start out a little rough at first, but as time passes and the couple’s perseverance grows, their little farm grows into something much bigger than any of them ever could have imagined.

Wait, did that last line sound like one of the most ridiculously cheesy and clichéd things you have ever heard? Well, as a matter of fact, the annoyingly pretentious narration by John contains lots more just like it (“by the time [one of our dogs] died, it was no longer a question of who had saved who”-actual quote, I swear), so if you’re as averse to that kind of airy-fairy junk as I am, you’re probably better off skipping this film entirely.

However, the worst part about The Biggest Little Farm isn't that, or the blatant refusal to focus on any of the farm’s flaws (for example, they leave their chickens out in a fenced pen at night instead of putting them in a coop, and a lot of them get slaughtered by coyotes as a result), or even a ridiculously pointless case of self-censorship (hint: it’s the reason why the film was needlessly, as the MPAA's website puts it, "edited for re-rating" despite not getting anything more than a PG to even begin with) is the most flawed thing in the film. It’s that there’s barely anything going on in it. At all.
​
Sure, there’s lots of agreeably silly farm antics, and the cinematography (filmed by John himself as he went along, who I have to give some real points to for effort) is incredibly beautiful, but the noticeable lack of any big central conflicts even start to wear their appeal down less than halfway through. That being said, though, if you don’t really care about any of those things and just want to watch some cute animals for about 90 minutes or so, by all means, visit this cute Little Farm. Otherwise, don't bother.