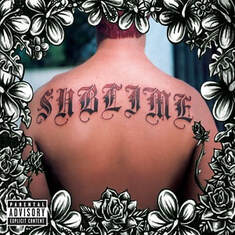 Nirvana wasn’t the only ‘90s band to lose its most famed member right when they got extremely successful: there were also these guys as well. After getting unexpectedly popular with their cult-classic debut release, 40oz. to Freedom, fans were eagerly waiting for something even better to come out of this easygoing ska-punk group, and boy, did they deliver with their self-titled album, which even managed to get the (positive) attention of mainstream critics. There was only one little problem: by the time it was released, the band’s lead singer and guitarist, Bradley Nowell had died from overdosing on heroin. Obviously, Sublime didn’t last too long after that (though some of his bandmates did manage to reunite and form another group called, just in case you didn’t know what the members were previously from, Sublime with Rome), but the last thing they did together is far from your typical “hype” product.

I'm betting you've already heard them at least once by now anyway, but the biggest hits from the album are easily where its undeniable peaks lie. I mean, come on, there’s the uplifting guitar-laden anthem “What I Got”, the gritty street-life story “Wrong Way”, the cheerily dark revenge fantasy “Santeria”, the snappily sexy “Caress Me Down”, and the breezily tense “Doin’ Time” (another revenge fantasy, but you wouldn’t know it from the irresistibly re-listenable beats and samples craftily deployed on the song). What more could you possibly want?

Seriously, though, I love this entire album so much that you might be wondering why I didn’t give it a perfect 10/10 instead of the slightly lower score you see below, and to be honest, I was struggling with that a bit myself. Finally, I came to the sad conclusion that there admittedly were a few annoying clunkers in the second half (the obnoxious “Seed” and pointless reprise of “What I Got”, for example) that justified knocking it down a notch, but overall, I’d say that the album comes as close to sheer perfection as any of the ones that did get the very highest scores from me. Saying it is Sublime would be repeating myself, so I’ll just leave it at that.