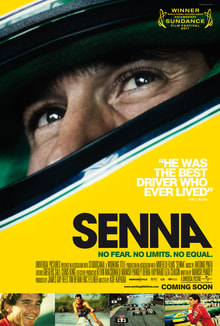 Celebrity docus, especially those concerning ones met with untimely deaths, have a tendency to dissolve into aimless speculation or predictable fawning. Thus, it is a huge relief that the inevitable one made about the Brazilian motor-racing champ of the title, Senna, steers well clear (pun intended) of both of those things, yet an even bigger surprise is that it does so by arguably being the most unique film of the genre ever made.

How does it do this? Simple: Senna’s entirely made up of moving, pulse-pounding, and very insightful archival footage from Aryton Senna's entire career without any of the cutaways to present-day interviews that other films of the sort repeatedly fall back on (yes, there are voiceovers from family members and ESPN commentators over some scenes, but the way they're used makes them flow naturally with what's happening onscreen without being distracting or annoying in the least).

Of course, none of it would amount to much at all if it didn’t tell the thrilling, resolutely human story of yours truly: a brave, determined soul whose pursuit of race-car stardom ultimately (if you don't already know this and would rather go completely spoiler-free, please stop reading now) wound up costing him his life. A lesser film would linger on this moment for much of its runtime to lesser effect, but this one wisely saves it for the very end, leaving the rest of Senna to chronicle his life, battles (especially that with arch-rival Alain Proust, who has spoken out against of the film’s admittedly rather limited focus of him in favor of you-know-who), failures, and triumphs on the track up until that horrifying moment on May 1, 1994.

In other words, along with The Social Network (not a documentary, but another wonderful film drawing from true-life events), Senna is that rare flick that accomplishes the seemingly impossible feat of making a modern classic out of material that looked like it would be anything but on the big screen. A triumph.