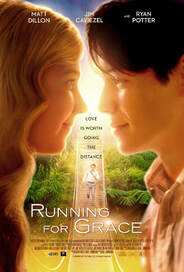 Talk about misleading titles. The Netflix movie Running for Grace, which I never would’ve even remotely considered seeing at all if it weren’t for the fact that my sister chose it to be her pick for Friday Movie Night, isn’t faith-based and barely has any running in it at all (at least, not until the very end– more on that later), so it’s not the blatant Overcomer ripoff that it looks like. In fact, it isn’t really much of anything at all, besides “well-shot”.

That would come courtesy of the beautiful scenery from where everything takes place, Hawaii; in fact, the long, stunning shots of waterfalls, mountains, jungles, and other beautiful flora there ultimately make the film worth watching if that’s all you’re really looking for. After all, it’s not like you’re really going to find anything else of value in this bland, by-the-numbers “Romeo and Juliet” story that can't even develop the central “forbidden romance” between the orphaned mixed-race teen doctor, Jo, and plantation owner’s daughter, Grace (yes, the Grace of the title) at all, so by the time he finally does what the title tells him to and speeds through the forest in an effort to prevent her from getting married off to some stereotypical "evil" guy, I was literally laughing out loud at the sheer ridiculousness of it all instead of being compelled or moved in any way.

Speaking of ridiculous, this boring, shallow relationship only occasionally pops up in a film that is otherwise near-plotless. Yes, those can be fun sometimes (Playtime), but watching Jo and his adopted father, Doc, treating various patients just gets dull really fast, though when (spoiler alert!) the latter person sees a car coming towards him, yet keeps standing in the middle of the road anyway for some unknown reason and gets fatally hit by it in what’s supposed to be the film’s big “emotional” moment, it at least makes things even more unintentionally hilarious, as does the noticeable overacting and bizarrely bright/blurry lighting in front of Grace’s house. See it for the cinematography, I guess, but don’t expect this underwhelming mess to be anything close to Graceful.