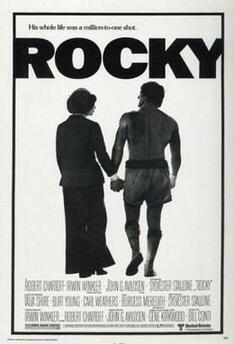 True, there have been other classic movies about boxing (Raging Bull comes to mind), but none of them have quite melded affecting human drama and edge-of-your-seat fighting to such a winning (not to mention extremely successful) degree as Rocky, which catapulted its star/screenwriter Sylvester Stallone to fame while also resulting in many increasingly panned sequels.

Despite the numerous memorable scenes (yes, including the one where he runs up all those steps), surprising-and thankful-lack of schmaltz, and brutal final showdown, what really stuck with me the most about this movie is how virtually all of it takes place off the ring. Yes, you read that right. One of the most famous and award-winning boxing flicks ever barely even has any boxing in it at all. Rather, it is actually more of a thoughtful, realistic drama about the lives of the average working-class city folks- more specifically, the titular character, whose sheer determination to win against longtime champ Apollo Creed and everlasting love for pet shop employee Adrian Pennino ultimately winds up saving him from a life in the gutter.

These days, Rocky might have just been another forgettable lump of Hollywood cheese (in fact, the reason I admittedly didn’t see it for so long was because my initial thoughts about it were that it would exactly that). And yes, it’s not like the film is completely absent of any corniness (cue the oh-so-intense training montage), but the superb writing, complex characters, and refreshingly slow-though not boring–pace not only make up for those occasional eye-rolling moments, but also cements its rightful place as a true sports classic that wholeheartedly deserved the “Best Picture” Oscar it unsurprisingly wound up winning.