queens of the stone age 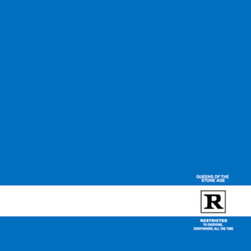 Despite the album itself probably (and ironically) just getting a mere PG-13 if the MPAA rating system was applied to music as well as film, the reason it was still given the eyebrow-raising title Rated R anyway was because that was the only way to prevent both Walmart and Queens of the Stone Age’s record label, Interscope, from slapping a Parental Advisory label on it as a result of the not-exactly-kid-friendly opener (more on that particular song later), though the tongue-in-cheek subtitle “RESTRICTED TO EVERYONE, EVERYWHERE, ALL THE TIME” (as well as the hilarious liner notes, which list out potentially offensive things featured in every song ranging from “Language” and “Violence” to “Paranoid Delusions” and “Blind Faith”) delivered a knowing wink at the dozens of people–me included–who flocked in droves to purchase it. A lesser album would only be remembered for this, but R, my real introduction to this gloriously weird stoner-rock band (“No One Knows”, from followup Songs of the Deaf, had already been drilled into my head permanently as a result of me hearing it several times on the radio before I even knew who it was by), still stands firm even as it approaches its 20th anniversary now.

Let’s talk about that opener first: “Feel Good Hit of the Summer”’s lyrical content may only consist of a laundry list of various legal and illegal drugs (“Nicotine, Valium, Vicodin, marijuana, ecstasy and alcohol– c-c-c-c-c-cocaine!”), but the track’s energetic chanting and chugging riffs make it one truly wild ride, as well as one of the catchiest songs that you can’t sing around anyone without getting a few weird looks.

What follows this breezy blast admittedly kind of disappointed me at first since it seemed to lack that same energy, but after listening to the album another time, I found myself stunned at how well all that mellow-yet-hard fuzziness flowed together while employing the same irresistibly catchy hooks that drew me into “Summer”; “The Lost Art of Keeping a Secret”, “Better Living Through Chemistry” (no, not the Fatboy Slim album), and “Monsters in the Parasol” are arguably the best examples of this, though–bar the shrieking “Quick and to the Pointless” (at least the title shows some real self-awareness on the band’s part) and overlong closer “I Think I Lost My Headache”–there is nary a stinker to be found anywhere. Those who erroneously write the album off as just another dose of meaningless drug-fueled nonsense are missing a real treat. A pretty strange-tasting one, to be sure, but still a deeply delicious treat nevertheless.