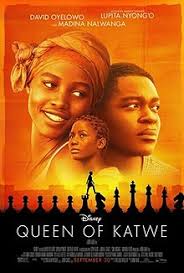 ​When I first heard about the film adaptation of the wonderful true-life book The Queen of Katwe about an African girl reaching out of her harsh life of poverty and crime in a Ugandan slum through the game of chess, I truthfully wasn't that excited.

​Although I hadn't read the book (and still haven't), I knew the story all too well and even though that in itself seemed very positive and inspirational, the fact that it was done by Disney turned me off because I knew that Disney had a reputation for Disney-fying (so to speak) their movies to make them appear way too polished, sugar-sweet, and formulaic than they need to be. Plus, I’ve never really been a Disney fan in the first place, so the idea of watching another Disney flick didn’t exactly grab me (especially after watching their weak and predictable sports drama “McFarland USA” Sure enough, when I finally decided to watch it, right from the very first strains of cliched Disney music, I knew EXACTLY where this was going to go. Yes, the main character’s brother does get hit by a car and has to go the hospital as a result and her older sister winds up running off with a flashy boyfriend (and getting pregnant as a result), but it’s all handled with a heavy dose of schmaltzy melodrama in order to not distinguish itself from the typical Disney flick.

And as for the story itself, which involves (as I stated before) a 10-year old African girl named Phiona who miraculously discovers the game of chess and effectively uses it to rise out of her life of poverty and hardship...well…while it’s certainly inspirational (and based on a story that is very much true), it’s WAY too soft and predictable to possibly grasp the harsh and cold reality of her former life in the slums. And of course, in a feeble attempt to make up for that, we get lots of cliched Disney music, schmaltzy melodrama, weak attempts at humor, and a mindless, I-saw-that-coming happy ending. Also, considering the film WAS based on a true-life story, it could've standed to include some actual footage from tournaments as well as some historical background of how Africa (especially Uganda) got to be the poverty-stricken wasteland it basically is today, instead of staging everything instead. In fact, the only thing that WASN'T staged was the pre-credits scene where the actual, real-life people were shown right next to the actors who portrayed them. This is actually a very interesting sequence, not only because the actors look slightly different from the actual people, but because in most movies that take their premise from true life stories just show either pictures, videos, (very brief) interviews, or even just text about where the real-life people are now (if they're still around). That scene, however, is different, but in a good, creative way. If nothing else, I'll give Disney that.

Speaking of Disney, for all you fans out there who really liked the movie (and are probably horrified and outraged right now), I will say that I did like the positive (though admittedly cliched and overused) messages and role models, and I thought the acting was absolutely fantastic. The African actors certainly knew what they were doing, even if they were in a tasteless and predictable Disney film. The bottom line is, if any of you Disney fans out there liked it, fine, I don’t blame you. But I personally would’ve liked the film better if it toughened up a bit like the excellent (and strangely similar) 2006 film Slumdog Millionaire.