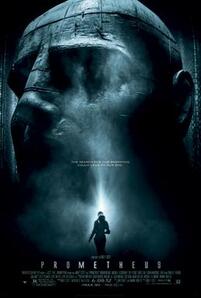 With the exception of the terribly received pair of Alien vs. Predator films (no, I haven’t seen either of them, nor have any reason to ever do so), the tepid Alien Resurrection effectively ended the wave of Alien sequels despite making a fair amount of money at the box office, and plans for yet another one were scrapped. So when news of a prequel done by none other than the same person who directed the classic first film, Ridley Scott, first became public, expectations soared through the roof, and the resulting Prometheus, though a much different turn for the franchise, doesn’t disappoint.

The first one in the series to really get going in a specific period of time (Christmas 2093), the film follows the crew of the scientific vessel Prometheus, led by the extremely advanced android David (Michael Fassbender), as they land on a distant planet in search of the origin of human life. However, what they actually find winds up being a lot more than they bargained for– and not in a good way.

Saying any more would probably spoil the effect, but it’s already pretty obvious that the very basic premise is more or less lifted straight from the first film. Looking past that, however, Prometheus is actually the best Alien film since the first two, especially since it skips right past one of the biggest problems I had with Alien³ and Alien Resurrection: shameless recycling of previous glories. In fact, Prometheus is arguably a lot less of a sci-fi horror movie than a philosophical, beautifully made (the cinematography and special effects in particular are absolutely gorgeous) sci-fi drama.

Don’t worry, there’s still enough effectively tense moments and, unfortunately, typically stupid horror-movie-behavior (hey, this creepy alien snake thing just popped up right in front of us! Let’s try touching it and see what happens!) to justify being slapped with the former tag, but the emphasis on big themes and thought-provoking ideas over scares and gore (in fact, even with a slightly gross "alien C-section" scene, this probably could have passed with a PG-13, though keeping the R rating to be consistent with the rest of the franchise is understandable) makes for what is arguably the most refreshingly unique film in the series.

Yes, it may not have you gripping the edge of your seat in horror as much as you may like, but Prometheus is not only a prequel whose sole purpose for existing isn’t to yell “see, this is how this particular person/monster/thing was born/made/created!” (in fact, it actually avoids anything like that entirely until the final few seconds), it’s also the only prequel of any series that I have currently ever seen that’s accomplished enough to be a great film in its own right while instantly redeeming the franchise that it is a part of.