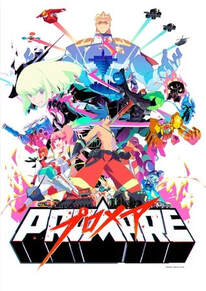 Upon first hearing that a new anime named Promare would be playing right by me as a result of a special Fathom Events screening, I was instantly excited. Immediately drawn to the boldly stylized animation style, I hoped with all my heart that it would be something worthwhile. And sure, as a mindless action flick, it’s entertaining enough, but by the standards of the genre (which are admittedly extremely high, what with Studio Ghibli and all), it wound up just falling kinda flat.​

Thirty years after the “Great World Blaze”, a highly powered group of firefighters called “Burning Rescue” hunt for the very people responsible: “Burnish”, humans who hold (though barely control) the power to shoot fire. After finally catching the leader of the Burnish and his crew in the opening 20-minute fight scene, one of the group’s members, Galo Thymos, eventually realizes that they aren’t really so evil after all, and that the government, in fact, are the true evil ones (never seen that one before!).

True, this premise is pretty dumb, but you have to admit that number of interesting things could have potentially been done with it. Unfortunately, any chance of that happening is promptly swallowed up in the nonstop violence and carnage, which just about pervades every single scene while barely giving the characters--much less the audience--any sort of break at all, leaving most of the film feeling less like an actual movie than a big chunk of ridiculously over-the-top animated sci-fi action with annoying Japanese pop music playing over it.

Even so, the plot does take enough surprising turns for it to not feel lazy or boring. In fact, towards the end, it actually gets (relatively) interesting enough to the point where you could see the better, more thoughtful film Promare could’ve been. If only it weren’t so loud.