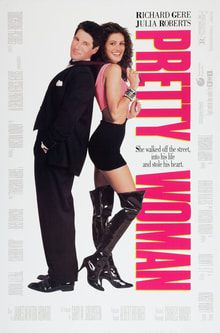 Well, whaddaya know? Eat Pray Love wasn’t the first preposterous fantasy for extremely rich people that Julia Roberts starred in– all the way back in 1990, she shot to worldwide fame with Pretty Woman, a film about a hooker (played by Roberts) who gets paid $3,000 by a rich guy (Richard Gere) to help escort him during a business trip, and even though nothing much of this sort really happens, the two almost instantly fall in love anyway. Gee, how surprising.

But seriously, what really is surprising about this film is its origins; originally a dark cautionary tale about class and sex work in the 1980s called−no surprise–3000, the script that would eventually become Pretty Woman’s was promptly rewritten to be a much lighter rom-com, and judging by the fact that the resulting film would go on to make over $463 million at the box office against a $14 million budget, it’s hard not to see why. If only the filmmakers had thought to add just a bit of depth to the film while severely remodeling it– or, at the very least, made it slightly believable.

Yes, the scenes added in the Director’s Cut I saw mixes a tiny bit more grit into the proceedings (though even with that, the tag for the film I see on Letterboxd still reads–and I swear I’m not joking about this–“Who knew it was so much fun to be a hooker?” Wonderful), but even with that, the film is still such a ridiculous piece of empty Hollywood fluff that I didn’t even believe it for one minute of its running time, and don’t even get me started on the aforementioned setup. Even so, this is just industry product, so I can forgive it for being a tad unrealistic– or at least I would if it wasn’t so utterly boring.

Seriously, stretching the film out to a full two hours (the DC only adds about 5 minutes) when it could have just as easily been a mere 90 minutes or so was a really bad decision on the studio’s part since nothing really happens at all during a lot of that runtime, though Roberts’ character, Vivian, getting all fancy so she can stick it to a store that turned her down on account of her former look led Dwight Schrute (a main character on the American version of The Office) to dub the film “[a]pparently… one of the best revenge stories of all time”. Yeah, right.

However, arguably the worst part about Pretty Woman is that when it all comes down to it, Gere’s character, Edward Lewis, isn’t really that much of a convincing “nice guy”. So what does the film do in order to have us audience members certain that he really is the man of Vivian’s dreams? Why, have her [SPOILER ALERT] nearly get raped by his revenge-seeking attorney so he can conveniently swoop in at just the right moment to save her! Isn’t that just marvelous? Hey, as annoyingly shallow as it was, at least Notting Hill didn’t sink that low while trying to manipulate the people who watch it.

Note: Why am I giving Pretty Woman a 5/10 when the film I compared it to, Eat Pray Love, got a slightly lower 4? I don't know. I guess the former film has more easygoing charm to it than the latter, but either way, I wouldn't really recommend it.