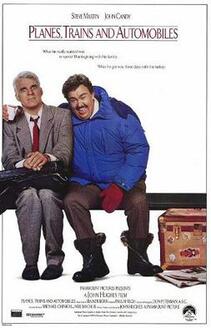 Every single night on Christmas Eve, my entire family watches National Lampoon’s Christmas Vacation (something I obviously have to review after that time comes again). It’s a little annual tradition here in this household, and one that my parents had been doing themselves even when I and my sister had been far too young to watch it ourselves. As such, upon first reading that Roger Ebert had his own little tradition of watching Planes, Trains and Automobiles "most every Thanksgiving", I realized that I could do that as well and have not one, but two annual film-watching traditions that would continue well into my own adulthood. Yes, I had already seen that particular movie once, but that was a few years ago, so this year’s Thanksgiving would be the perfect time to view it again, I reasoned in my head. And boy howdy, was it ever.

Desperately trying to get home in time for–you guessed it–his family’s Thanksgiving dinner in Chicago, harried advertising executive Neal Page (Steve Martin) is beset with all sorts of ridiculous troubles, whether it be his plane re-routing to Wichita due to a snowstorm, the train he’s on suddenly breaking down, or the remaining cash he had left getting stolen. And to top things off, he somehow keeps getting stuck with a big-hearted but obnoxious shower curtain ring salesman Del Griffith (John Candy), who starts off being pretty irritating, but grows more sympathetic with time, especially towards the surprisingly touching ending.

Such subtle character development–not only from Del, but also Neal–is extremely refreshing in this day and age of other likeminded “comedies” prioritizing unfunny raunchiness and groan-worthy slapstick over anything like that (I’m looking at you, Due Date– a blatant Planes ripoff that I have zero interest in seeing), but there are tons of laughs too. Yes, some parts admittedly can get kinda stupid at times (remember the annoying/gross stuff Del initially does when Neal has to share a bed with him there? Yeah, me neither– and for good reason, too), but there are so many other comedic moments that do land that listing all of them out here would be simply impossible.

Let’s see, there’s Neal stuck with his ridiculously boring boss at the very beginning (stay put after the credits to see him again), the “shower” scene (don’t ask), the “those aren’t pillows!” moment (really, really don’t ask), the “Bueller…Bueller…” guy from Ferris Bueller’s Day Off making a hilariously appropriate cameo, Neal’s profanity-laden ranting at a chirpy agent after finding his rental car completely gone (the only reason that this otherwise PG-mild flick got a slightly stronger R– I know I complained about this in My Cousin Vinny, but come on, that particular scene is simply classic), and Del and Neal driving the wrong way on the highway and not even realizing this until just before seeing two trucks headed right towards them. There’s even more hilarious stuff than that which I haven’t even mentioned, but watching it yourself is way more entertaining than just reading some boring list of it here. Even if it isn’t turkey day at the time you’re reading this, you can’t do much better than Planes when searching for light, truly funny comedy with that “nightmarish travel” theme.