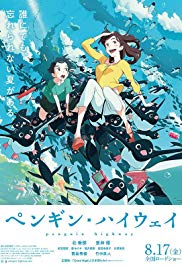 Though you may not know it from the woefully small amount of them that I've reviewed this year, I am a really big fan of foreign animation, particularly anime—in fact, I've literally seen every single Studio Ghibli film ever (that is, everything from them bar the various shorts they've produced over the years), as well as many, many more like (or unlike) them. Therefore, it was only a matter of time before Penguin Highway caught my attention, and getting it as part of my Christmas loot was even better. And surprise surprise, it turned out to be easily the best anime I've seen come out of 2019. Go figure.

Our main protagonist here is Aoyama, a very mature fourth-grader obsessed with science, experiments, and, um, woman's chest areas (which he crudely refers to as "boobs"). Basically, think of Jason Fox (from the comic strip "Foxtrot"), only with his feelings about the opposite sex completely reversed. Anyway, things are about to get very interesting for him indeed once penguins randomly start showing up around town, as does a mysterious woman who may or may not have supernatural ties to them.

Sure, Penguin Highway can occasionally be juvenile, unfocused-seeming, and ridden with characters who are little more than irritating clichés (the obligatory smirking bully and his idiotic henchmen, for example), but if there's one thing it's most definitely not, it's boring. Or unimaginative, for that matter. Seriously, the film is so consistently creative with its very unpredictable storyline that I was left flabbergasted at just how much the filmmakers managed to squeeze into just two hours, which the beautiful animation only elevates even further. Going into any more specific details than that would be spoiling the fun for you, so I'll just leave it at that. Just try watching it yourself to see what I mean, why don't you?

Note: I really, really wanted to give Penguin Highway​ a 9/10, but was forced to dock it a notch due to how much Aoyama's breast fascination grated on me, which was probably added to his character to show that he was still just a young boy even with his adult mannerisms, but just came off as incredibly annoying and unnecessary nevertheless. Oh well. Still a very highly recommended film, though.