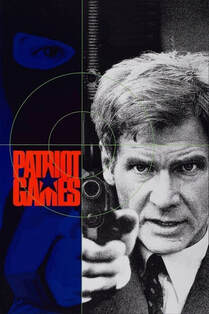 Other than James Bond, I can’t think of a film series other than Jack Ryan that swapped out the actor playing its titular character so frequently; in fact, by the time the fifth–and probably last–one, Jack Ryan: Shadow Recruit, came out in 2014, the franchise was on its fourth big-name star. Luckily, in the early 1990s, they struck gold with Harrison Ford of Star Wars and Indiana Jones fame, who played Ryan’s role wonderfully in this film and Clear and Present Danger. Both films are exciting, of course, but despite what sites such as Rotten Tomatoes and Metacritic may say, the former is easily the best of the two.

While the first JR film, The Hunt for Red October, was focused on international intrigue (something Danger copied to lesser effect), Patriot Games zeroes in on something even more important to the courageous CIA analyst: his wife and young daughter, which are both threatened along with him by a crazed IRA terrorist (Sean Bean) seeking revenge for his brother, killed by Ryan in the midst of a surprising assassination attempt being thwarted. This more personal narrative works amazingly well, and elevates what could have just been thin and forgettable to something of real emotional depth. Of course, the film is smart enough to know that us audiences also want hefty amounts of nail-biting tension and intense thrills, and although it gives it to us in spades, even the slower parts in between are far from boring.

Admittedly, a climactic scene involving a boat chase/fight in the middle of a severe lightning storm is a bit over-the-top, especially considering how everything else is effectively more or less grounded in reality (famed critic Roger Ebert and, unbelievably, the author of the original Jack Ryan books, Tom Clancy, have also noted this), but picking apart that one particular moment when the rest of this near-perfect film is one of the best ‘90s thrillers I have ever seen would just be unfair.