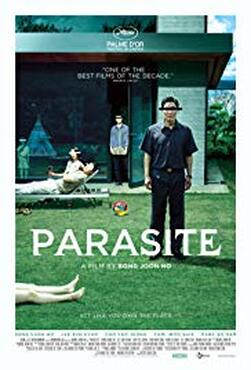 The first R-rated movie I ever saw was 1989’s Glory, which I had to watch as part of a school project on the Civil War. That was a few years ago, when I was 13. Fast forward to just a few days ago, when I, at 16, realized how annoying it was that I never saw any films with that particular MPAA rating on the big screen. I know how ridiculously trivial of an issue that is, but it still just kept nagging at me anyway–so much, in fact, that I finally decided to get up and change that once and for all.

But I didn’t want to see just any old R-rated movie in the theater, mind you. I wanted to see one that was special. One that was brilliant. One that I could proudly tell people about for the rest of my life. Thus, when Parasite, a film almost universally acclaimed by critics, came back to one of the theaters near me, I knew that had to be it. And thankfully, it was.

Immediately after the credits rolled on the Sunday screening attended by me, I couldn’t stop talking about the film. Not while walking out of the room with my dad (the person who watched it with me), not while driving all the way back home, not while at home… heck, I’m still doing so in my mind even now. So I might as well just tell you why:

First things first, unlike the last film I reviewed (the abysmal faith-based drama Let There Be Light), Parasite is not a movie that deserved to be spoiled. At all. In fact, although I will be avoiding spoilers entirely, if you really want to have the best experience watching it, I’d suggest not reading this review any further until doing so. Believe me, it’s worth it. Come on now. Go. [All right, have we only got the people who’ve seen the film (or don’t care about me explaining its brilliance to them before seeing it themselves, which would be very unwise) reading at this point? Good.]

Again, Parasite is most definitely not a film that deserves to be even vaguely spoiled, so I will only provide you with this extremely basic summary: the very poor Kim Family manages to all scam their way into working in well-paying jobs (math tutor, housekeeper, personal driver) for the very rich Park Family, a scheme that works extraordinarily well… until something bizarre happens.

How do I even begin to describe this film? As a razor-sharp satire on class and capitalism? A consistently hilarious black comedy? An extremely nerve-wracking psychological thriller? The greatest Alfred Hitchcock film that Hitchcock himself never actually made? (If you look closely, you can see a wholly appropriate picture of him on one of a few binders resting on a shelf in the Parks’ house.) A sheer masterpiece easily ranking among the greatest of the 2010s, if not of all time (if it doesn’t win every single one of the Oscar noms it got, I will swear off watching them forever)? All of the above–and more, even.

A lesser film would have crumbled under the weight of all those tonal shifts, or at least handled them very awkwardly (coughcoughcough moon coughcoughcough), but not Parasite. Bong Joon-Ho’s brilliant direction and the superbly twisty screenplay (co-written by him) know just when to lull viewers into a false sense of security, when to crank up the unbelievably clever wit, when to tone it down a bit, when to subtly shift the mood of a certain scene, and when to suddenly erupt in perfectly timed bursts of shocking violence. That last point in particular is one that some have disliked for its jarring bloodiness (including my dad, who only gives the film a 6/10 because of that), but it’s what I am particularly impressed by.

See, when modern-day Hollywood wants to “shock” or frighten audiences, they mostly do so by randomly splattering the screen with gore that has zero context or meaning, or playing loud “jumpscare” music over something that may not even be scary in the first place. Parasite does so by ratcheting up the tension and atmosphere right before something horrific happens, not forgetting to lose sight of the intricately woven plotline in the process (seriously, the film just did this so well that I was practically hyperventilating in my seat even when everything was nice and peaceful). Guess which one actually succeeds at achieving those effects.

The cherry on top? In addition to being flawlessly written (and flawlessly acted too, by the way), Parasite is also flawlessly made as well. I am not exaggerating one bit when I say that the cinematography, be it the David Fincher-esque green-tinted house that the Kims hide out in, the stunningly perfect-looking mansion that the Parks flourish inside, or during a gigantic rainstorm, looks absolutely beautiful in every single frame (yes, even during the film’s more unpleasant moments), gluing my eyes to the screen for the entire 132-minute runtime.

I have nothing more to say, really. Even if you disobeyed my orders and read this entire review without seeing the movie first, it is still an absolute must-watch–and I do mean must-watch–anyway, whether you’re also able to still catch it in the theater, or at least buy the Blu-ray off of Amazon or rent it from a streaming service such as Vudu. Either way is fine, of course.

2-10-20 update: All right, Parasite didn't win all of the 6 Oscar noms it got ("Best Film Editing" and "Best Production Design" were respectively awarded to Ford v Ferrari and Once Upon a Time... In Hollywood instead, neither of which I have seen), but it won the 4 biggest ones: Best Original Screenplay, Best International Feature Film (rightfully changed from Best Foreign Language Film since, you know, not all international films are in a language other than English), Best Director, and (drumroll, please) Best Picture. Not only did this more than even out these losses, it also made Parasite the first foreign-language film in cinematic history to take home the top prize. All the more reason for you to watch it yourself, then.