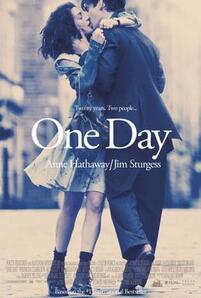 If somebody had suggested that I watch One Day, which is not only a rom-com, but also one starring Anne Hathaway, I probably would have politely thanked them and then forgotten about it entirely. Not that I have anything against Hathaway, but considering how boring and unfunny the last movie I remember seeing her in was (Bride Wars, anyone?), I wasn’t really expecting that much more out of this one either when Mom chose it to be her pick for Friday Movie Night. Well, I guess you can count me surprised, for it is actually slightly better than I had been initially expecting. I guess that could also be a result of my extraordinarily low expectations for the genre in general, but still.

One Day is based on a book of the same name, and while I haven’t read it, considering that the person who wrote it also penned the screenplay for this adaptation, it’s kind of a shame that the film apparently, as Rotten Tomatoes puts it, “lacks the emotion, depth, or insight of its source material”. What's left, though, isn’t exactly bad either. The story is this: Emma Morley (Hathaway) and Dexter Mayhew (Jim Sturgess) meet on July 15, 1988 and come very close to sleeping together, but ultimately decide to just be friends. From there, the film follows them on each July 15 of all the years after that as the two grow up, pursue their separate careers, and keep going back and forth on whether they’re really meant to be with each other or not.

Unfortunately, One Day's central gimmick–that all of this is taking place on that same one day of the year (hence the title)–isn’t nearly as interesting as it looks; in fact, I didn’t even notice it until looking up more info about the film after finishing it [(500) Days of Summer, this is not]. Luckily, that core flaw is easy enough to ignore in what is otherwise a slightly more complex romantic film than you may think, with a surprising (if admittedly kinda random) narrative twist near the very end being particularly touching. I’m not trying to say that this film is some kind of hidden masterpiece, but you could certainly do a lot worse than it for date night.