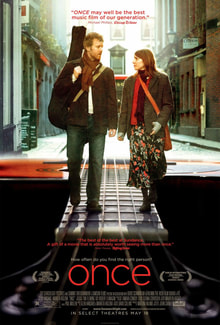 ​While I have this platform right here, the time seems right to recommend another film that you all may enjoy: Once. It's pretty similar to a film named La La Land, which, as far as I know, is still very much liked by the both of you. However, it's similar in the fact that there’s great music and performances, but different in almost every single other way.

For instance, whereas La La Land was made with $30 million, Once’s budget was only $150,000. No, I’m not making that up–check here if you honestly think I am, where you’ll also find out that it made over $20 million in the box office. Of course, the fact that it was picked up by Fox Searchlight Pictures (which will now just be Searchlight Pictures since Disney owns everything, including them) certainly helped that, but still, the fact that something made for that little earned that much in return is simply incredible. Meanwhile, the new Dr. Dolittle movie (simply titled Dolittle) cost over $175 million to make, and has only made $15.9 million so far. Funny how that works.

Anyway, Once’s basic plot is something like this: in Dublin, Ireland, a struggling street musician meets and befriends a young Czech flower seller, and for a week or so, they hang out together and play music before [SPOILER ALERT] ultimately separating. Since that’s not really much of a plot, the film can slightly drag at times (and the camera work is a bit shaky at times, but what did you expect for $150K?), but the fact that the story’s not typical Hollywood formula, and rather a very documentary-like look at the lives of these kinds of people, makes it even more special for me.

However, it’s the music itself that really made me decide to specifically address this review to you. See, that’s another way Once is different from La La Land–while the latter’s music was brilliantly reminiscent of classic musicals such as The Umbrellas of Cherbourg (which you absolutely must see if you haven’t already done so), the former’s is all raw, heartfelt, truly unforgettable guitar and piano ballads written and performed by the two leads, who front their own folk rock group, The Swell Season, in real life. (Their performances here are great, by the way, even without being measured against the standards of other inexperienced actors.)

And to be perfectly honest with you, I actually found myself liking Once's music more than some of La La Land’s at times. I know how shocking that may be to you, but trust me, it’s true. In fact, it is so great that I am now considering buying the soundtrack off of Amazon, which you should totally do as well after watching the film itself.

​Seriously, you just have to.