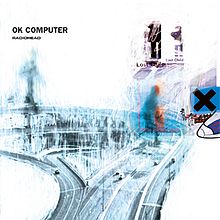 Aside from the self-loathing smash hit "Creep", Radiohead's often overrated debut Pablo Honey could have been made by any number of pale post-grunge imitators. However, the band's sophomore release The Bends was a massive improvement, triumphantly carrying them from the gutter into the star-studded limelight. With everyone's expectations weighing heavily on their shoulders, the none-too-cheery alt-rockers not only managed to vault even farther than that with their next album, OK Computer, but also create a sublime masterpiece for the ages that is a sure contender for the greatest album of all time.

As one might expect from a band that first made its name with a song moaning about how socially awkward they were, the album’s songwriting, though masterful, is extremely miserable; exploring offbeat topics such as car accidents (“Airbag”), nervous breakdowns (“Let Down”), and police brutality (“Karma Police”). These lyrically downbeat tones reach a genuinely uncomfortable peak on the 6-minute epic “Paranoid Android”, which packed an appropriately bizarre music video. These bleak visions are masked by ironically upbeat music, which is especially pleasant on “Subterranean Homesick Alien”, “Let Down”, “Lucky”, “The Tourist”, and “No Surprises”. Considering the latter track’s suicidal mood, it’s extremely surprising that it became the album’s biggest hit.

As you might gather from all of this, OK Computer is not the easiest album to sit through. Indeed, it lacks Kid A’s groundbreaking sonic experimentation and In Rainbows’ warmth, and admittedly almost starts to get slightly too strange for its own good on the robotic “Fitter Happier” and the nightmarish “Climbing Up The Walls”. Despite that, the album still ultimately stands as Radiohead’s best, and one of the greatest and most influential releases of the entire decade.