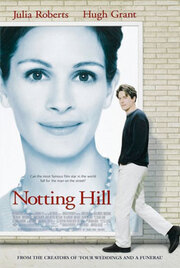 You ever see the “opposites attract” plotline in rom-coms before, where two people who could literally not be any more different from each other almost instantly wind up falling in love, only to break up over some minor trouble and get right back together again before you can even so much as blink? Notting Hill certainly hopes you haven’t, for that’s unfortunately the only thing it has going for it besides a few grade-A actors and vaguely funny jokes.​

This time around, the formula is used as follows: Nobody knows William Thacker (Hugh Grant), the owner of a meek travel bookshop in England. Everybody knows Anna Scott (Julia Roberts), an actress loved the world over. So you’d figure the chances of them ever meeting by chance and getting together would be pretty much nil, right? Wrong.

While saying this premise is predictable as hell would be a serious understatement, it should at least allow for some much-needed insights into the dark side of fame and Hollywood glamour, but since that would jolt it out of its easygoing tone (and therefore make less money, cynical studio heads probably argued), the closest we get to that is a minor plot point involving nude pictures of Anna being secretly taken and distributed around the Internet, and even that's barely mentioned at all (gotta secure that family-friendly PG-13!).

In fact, neither the central romance or any of the aforementioned movie biz shtick accelerate or build any steam at all, just banally fizzling away instead of reaching a climax and blowing up on-screen. Granted, as a pleasant date-night flick thankfully lacking the ridiculous schmaltz most of its counterparts annoyingly fall back on, I guess you could do worse, but Notting Hill is just too shallow to be otherwise useful in any way.