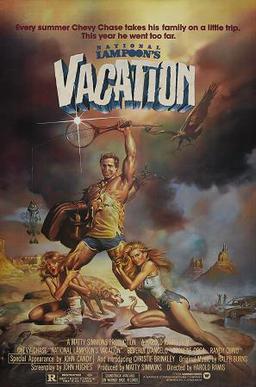 Believe it or not, this is actually the first comedy reviewed on my website that I have given a perfect rating to. That’s not to say that there aren’t any flawless comedies, but just that all the ones I reviewed previous to this one just had one thing or another that prevents me from bestowing that mystical 10/10 upon them.

And sure, National Lampoon’s Vacation, the classic ‘80s screwball comedy that spawned a few lesser sequels (one of which, National Lampoon’s Christmas Vacation, has literally become an indespensible part of the holiday season at this house), has some of the gratuitous nudity, gross-out gags, and outdated race jokes one typically associates with ‘80s comedies, but only some. In fact, they’re such minor chinks in this film’s otherwise impenetrable armor that I’m forced, perhaps against my better judgment, to begrudgingly give them a pass, considering how consistently memorable and hilarious everything else is. But I’m getting ahead of myself.

Inspired by a short story for–you guessed it–the National Lampoon magazine (written by John Hughes, who also served as the film’s screenwriter), Vacation opens with Clark Griswold (Chevy Chase) heading to a car dealership with his young son Russell (aka “Rusty”; note how the ages of him and his sister rapidly flip back and forth throughout the series) to get the brand-new car bought specifically for the family’s upcoming cross-country trip to Walley World, only for an ugly green station wagon to be in its place. Plus, while they were arguing with a salesman about this, the automobile they were just driving in was unceremoniously hauled away to a junkyard and smashed to bits.

But hey, even with that little mishap, things can only get better from there, right? Nope–in fact, once the Griswolds finally do set out on the aforementioned trip, they somehow get even worse, and the laughs (yes, genuine ones) never stop after that. Come to think of it, they never even stop at all, not at any point. No, seriously.

Watching National Lampoon’s Vacation made me realize a few things: 1) how much Christmas Vacation blatantly stole from it, particularly at the very ending (the reason why that particular film probably deserves to remain at an 8/10, as undeniably hilarious as it was in its own right); 2) that I really should have given the slightly similar, but no less unique “bad trip” comedy Planes, Trains and Automobiles a perfect rating as well since it’s arguably just as funny; 3) that it is literally impossible to get the film’s theme song out of your head upon hearing it (try it, I dare you); and 4) how much I’d really been missing out on by neglecting to watching it all these years. [Don’t blame the R rating for that–even with some profanity and the (brief) aforementioned nude shots, this film is almost PG-friendly by today’s extremely boundary-pushing standards.]

In short, everything that could possibly go wrong on the Griswolds’ little trip does go wrong, and the screenplay handles these events so cleverly, so darkly (poor Aunt Edna), and so–believe it or not–unpredictably that it never runs out of gas once throughout the film’s entire 98-minute runtime. The Griswolds themselves, as well as the various people surrounding them (namely, funny-as-ever supporting turns by Randy Quaid and John Candy) are extremely funny in how simultaneously relatable and ridiculous they are, with Clark’s slow descent into complete and utter madness easily ranking among the most memorable moments in any ‘80s movie.

Want to know the only thing that makes me regret watching this near-masterpiece of the genre? The fact that I now have to watch the remaining sequels of it that I haven’t seen yet (National Lampoon’s European Vacation and Vegas Vacation–yes, by the time of the latter film, the series had dropped the National Lampoon label entirely), both of which were received very negatively. Woo-hoo. Maybe afterwards, I’ll watch this original Vacation to cheer myself up again. Yeah, that’ll work.