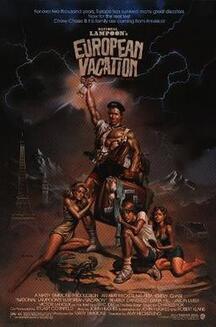 Why, Hollywood, why? Why do you always have to take genuinely creative and original films and taint them forever by making such crappy sequels to them? Why did the nearly flawless National Lampoon’s Vacation have to undergo this treatment, and why did you have to bring back both Chevy Chase and Beverly D’Angelo for that? Why did you not only have the virtually unknown Robert Klane pen the screenplay instead of the person who wrote that seminal first film, John Hughes, but also try to ruin the latter’s career entirely by crediting him for “leftover material”? These are just some of the questions I have after seeing the abysmal National Lampoon’s European Vacation, easily one of the worst sequels to a great movie that I have ever had the displeasure of watching.

This time, instead of a cross-country car trip to Walley World, it’s a country-hopping visit to Europe won on Pig in a Poke, a game show where the host commits statutory rape with the Griswolds’–wait, no, the Griswalds’ (your guess is as good as mine as to why their last name would be misspelled like that)–young daughter. That’s not when I really gave up hope that the movie would be any good, though. No, that would have to be during an excruciating musical number performed by a towel-clad D’Angelo and stupidly filmed by Chase on his camcorder (take a wild guess whether that becomes a plot point later or not), at which point I legitimately wanted to rip my ears out of my head. In fact, I can’t decide which I dislike more: that, or the family’s awful, ridiculously pointless dream sequences that literally add nothing to this already terrible movie at all.

Most of the time, though, European Vacation is at least a more boring retread/ripoff of the original Vacation (right down to the laughable poster and lame attempt at remixing that first film’s timeless theme song, “Holiday Road”) than an outright annoying one, though when it is annoying, it is literally cringe-worthy to the point of nearly being unwatchable. Annoying or not, though, with any sense of unpredictability or realism now completely gone, the family’s disjointed trips across the pond never yield any sort of purpose, fun, or hilarity at all, not even when Eric Idle (of Monty Python fame) cameos a few times. The icing on the cake? The cinematography isn't even that good for a film taking place among such beautiful scenery (not like Vacation's was especially great either, but still).

You know what I loved about the first Vacation film? The fact that the situations the Griswolds (God, I hate having to keep going back and forth between their different last names) got into were ridiculous, yet also surprisingly plausible as well, which made them all the more hilarious and relatable. How am I possibly supposed to relate to any of the moronic things that happen here, including the family unknowingly knocking over Stonehenge with their car, Chase crashing the plane he’s on into the Statue of Liberty, Chase chasing (ha ha ha, I’m so clever) D’Angelo when she gets kidnapped in some ridiculous criminal subplot, the aforementioned daughter (who, by the way, is easily the most irritating character in the entire movie) constantly shoving her face with food and whining about her boyfriend, the parents idiotically mistaking random strangers for each other and trying to have sex with them as a result, and... and...

The only thing that makes this dismal installment in an otherwise great series really worth watching? Seeing how much more female nudity there is in this PG-13 sequel than the R-rated original film. Gotta love the ‘80s.

3/10
​
Note: Lowered from 4/10 after watching Vegas Vacation and realizing that that boring, but slightly better film just couldn't have the same rating as this dumpster fire.