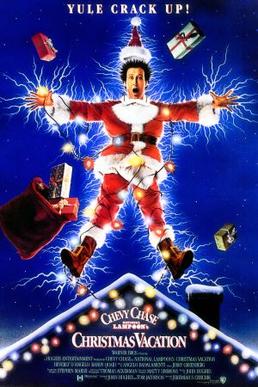 In case you didn’t already read about this in my Planes, Trains and Automobiles review, every single Christmas Eve, my entire family watches National Lampoon’s Christmas Vacation come nightfall, after which my sister and I both have to go to bed and try with all our might to get enough sleep before tearing into our presents with glee the next morning. And why wouldn’t we all do this? It’s light, goofy, often hilarious, safely PG-13-rated, and filled with more than enough festive cheer to qualify as enjoyably watchable holiday entertainment.

Yet, while viewing it this year, I couldn’t help feeling that the film would’ve really benefited from a bit more of the single-minded focus that made Planes such a timeless holiday (that is, Thanksgiving-centered) classic. For one thing, despite what the title may say, it does not feature the main characters taking any sort vacation for Christmas, but rather staying home and getting in all sorts of comical holiday-related mishaps instead.

These people are the Griswolds, of course, and although you could argue that the title comes from all of their crazy relatives (including RV-dwelling cousin Eddie–played with hilariously trashy conviction by Randy Quaid–and his equally off-kilter wife and kids) vacationing at their house and somehow making everything even worse in the process, I suspect that it was really just tacked on so you’d know that it features the same family that was in National Lampoon’s Vacation (received really warmly by critics) and National Lampoon’s European Vacation (received really coldly by many of those same critics).

Either way, there’s no denying that the film features some really, really funny moments, especially in the first (live-action) scene and with Cousin Eddie; just like there’s also no denying that it also features some really, really stupid moments that arguably didn’t even need to be there at all (Clark Griswold fantasizing about a bikini-clad woman stripping while “Mele Kalikimaka” plays; him not only getting hit in the face repeatedly by a couple wooden boards while in the attic, but also desperately holding on to his roof’s gutter as it breaks off from the house and sends a sheet of ice shooting through his neighbors’ window like a torpedo; a cat getting electrocuted).

And yet, that perfect combination of smart wit and ridiculous silliness is what really makes Christmas Vacation such a fun holiday watch, even when it really started to stretch my suspension of disbelief by the end. In fact, it is the Caddyshack of Christmas movies: disjointed, annoyingly juvenile, and unabashedly goofy, but filled with something that makes you want to go back and watch it again, year after year. See why doing so has become such a big annual tradition at my house?