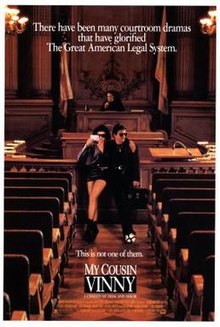 To me, though probably not to you, the most immediately interesting thing about My Cousin Vinny is its MPAA rating. While the usage of profanity in movies is something I don't care about, the fact that more than 30 really big ones are shoved into what is otherwise a pretty PG-rated movie for the sole purpose of getting an oh-so-edgy R is kinda bizarre if you ask me. Luckily, however, that is not the only memorable thing about this classic 90s flick, for it is an often hilarious look at just how bad a court of law could potentially be when handling a case of mistaken identity.

Vinny starts off following Bill Gambini (The Karate Kid's Ralph Macchio) and Stan Rothenstein, two college students who accidentally shoplift a can of tuna from a convenience store and think that's the reason why a cop suddenly pulls them over. However, he's really arresting them because he thinks they were the ones who just fatally shot the clerk of that particular place. Worse, neither of the twosome even realize that they’re being charged for that until it’s far too late. Luckily, they do have one guy who can help them out: the titular cousin (Home Alone's Joe Pesci), a personal injury lawyer from Brooklyn who has absolutely no trial experience, yet could very well save them from the slammer- or worse.

Considering a ridiculous situation like that, you'd think the film would focus more on how Bill and Stan react to all these absurd events than the titular character. Unfortunately, you'd be wrong. Granted, most of the scenes focusing on Vinny and his fiancee (Marisa Tomei, who won an Oscar for her role) are pretty clever and well-written (that is, except when they reuse initially funny gags such as the old “they-can’t-sleep-anywhere-without-getting-disturbed-by-something” joke to the point of exhaustion), but they ultimately distract from the main plot, making the film very uneven at times. Additionally, the way certain plot points just happen to fall into place is just a little bit too convenient to really be believable, something that the predictable ending takes to almost cringe-inducingly extreme levels.

That being said, though, the talented cast’s superb comic performances ultimately make the film worth viewing if you just want to sit back, relax, and watch something fun and light-hearted for your next movie night.