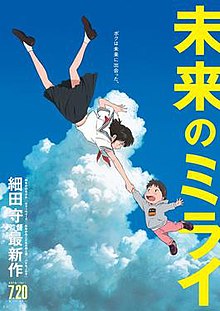 Despite probably looking absolutely wonderful at first glance, some films-be they live action or (in this case) animated-actually turn out to be kinda bad, or at least much less accomplished than initially expected. Even with extremely positive reviews on Rotten Tomatoes and an Oscar nomination, the Japanese anime film Mirai unfortunately fits right into that particular category.​

Basically, the film tells the story of Kun (who is inexplicably voiced by an adult woman in the original Japanese dub- and it shows), a little boy who’s magically visited by a variety of different characters from his family that apparently try to teach him to be a better person since he’s been abusive towards his baby sister (the girl of the title, who also appears as a teen traveling from the future multiple times) and just plain awful towards the entire rest of his family. And that is exactly where Mirai’s biggest flaw lies: the nearly complete lack of any character development.

Believe me, it’s painful enough to watch Kun be an uncontrollable brat towards the beginning of the movie, but that pain is increased tenfold as it keeps going on. Every single time you think he’s finally managed to mature a little bit or gain some self-confidence (for example, finally riding a bike without training wheels without falling over), the very next scene sees him being just as bad, if not even worse, than he was beforehand. Of course, the last 5-10 minutes sees him appearing to finally grow up, but at that point, I half-expected him to start whining or screaming about something else right before the credits rolled.

Unfortunately, that’s not even the only flawed thing about this movie. In fact, only the beautiful animation even remotely makes up for the other awful aspects of it, including outdated stereotypes (you’d think the old “clumsy dad who can barely do anything” cliché would’ve been long dead by now) annoyingly bizarre fantasy elements, gaping plot holes (if the past, present, and/or future versions of people really can’t exist at the same time for some reason like Mirai herself says, then why is Kun clearly talking to what is later revealed to be his teenage self in one scene?), a complete lack of plot structure, and a large chunk not even featuring the titular character. In short, an irritating mess that could’ve been really good, but instead wound up being one of the most overrated things I’ve ever seen. Not terrible. Just overrated.