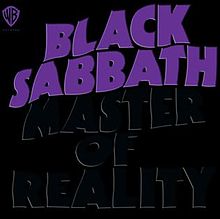 Black Sabbath's sophomore release Paranoid is frequently hailed as their greatest set, mostly due to the inclusions of the massive hits "War Pigs", "Planet Caravan", "Iron Man", and the title track. However, if the followup, Master of Reality, doesn’t quite take that spot, it at least edges extremely close to it.

While the underrated Vol. 4 experimented with psychedelic metal (with surprisingly good results), Master of Reality best exemplifies the classic Sabbath sound: sludgy, ultra-heavy, gleefully over-the-top, and simply jaw-dropping; with all the preachy metal fantasy horror lyrics that anyone even remotely interested in Sabbath could ever want. All of this (and much, much more) are best showcased on the classic stoner anthem “Sweet Leaf” (which was so massively influential that it was trashed by the Butthole Surfers on “Sweat Loaf”, which in turn was referenced by the Red Hot Chili Peppers on “Deep Kick”, who also played “Sweet Leaf”’s riff on “Give It Away”), the surprisingly Christian “After Forever”, and the chilling “Children of the Grave”. Aside from all of that, not counting the two acoustic instrumental interludes “Embryo” and “Orchid”, the album is also notable for having the least amount of duds on any Sabbath album, with virtually every single track being a kicker (even the “Planet Caravan”-ish ballad “Solitude”).

Considering all of this, it’s simply mind-boggling that Master, along with every single other one of Sabbath’s early classics, was panned by critics upon its release. No matter. Just ignore the negative reviews and give this sublime masterpiece a well-deserved listen or two.