lu over the wall 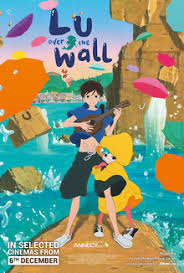 If you’re an anime nut like me, you’ve probably already heard of the upcoming Lu over The Wall. In fact, you might even be literally counting the days until it hits select theaters around the country in May. Therefore, you will probably be ecstatic to know that I was fortunate enough to attend a special pre-release screening as part of my state’s annual Green Mountain Film Festival. “Come on, tell me about it then!” you might be demanding this very second. “Was it a good movie? Was it not a good movie? Should I see it? Should I not see it? I really, really, really need to know!!” Well… let’s just say that as far as animes go, this is most definitely not up there with the best, the halfway decent, or even the remotely enjoyable.

Of course, it didn’t exactly start out that way. In fact, for the first 5 minutes or so, when we were first introduced to the moody music-loving teenage boy at the heart of the story, it actually wasn’t that bad. But it all went downhill the moment his two friends opened their shrieking little mouths. If you haven’t seen them yet, in the film, trailer, or otherwise, let me tell you: they are some of the most shrill human beings on the entire planet. The boy is extremely loudmouthed and always saying “cool” things (“Dude!”, “That would be so rad!”, etc.), but it's girl's high-pitched whine that truly made me start to regret seeing this movie. Mind you, the version I saw was the English dub, so if the original Japanese voice cast happens to be less whiny, I’d highly appreciate it. Anyway, the plot really should’ve kicked into high gear by the time the titular Lu, who actually happens to be a mermaid, first made her appearance. But no. As it turns out, Lu is as just as whiny as all the rest (if not even MORE so) and can’t even speak proper English, causing her to frequently scream “LIKE!!! LIKE!!! LIKE!!! LIKE!!! LIKE!!! FRIEND!!! FRIEND!!! FRIEND!!! EVERYBODY FRIEND!!!!” pretty much all the time.

Did I mention that she possesses some magical powers that gives everybody an irresistible urge to dance (cue the cheesy dance scenes), as well as make water do, well, pretty much whatever she likes? While the former may help the main characters, who conveniently happen to be in their very own high school band, her odd personality traits certainly don’t do the audience any favors. On top of all that, pretty much every single character in this film is one-dimensional. The shrill and whiny remain shrill and whiny. The cold, evil jerks remain cold, evil jerks. The monstrous, superstitious freaks pretty much remain monstrous, superstitious freaks. On top of it all, our other main character, Kai Ashimoto, selfishly mopes around with his hair covering his eyes for about 90% of the movie.

Oh, and I still haven’t mentioned the film’s most absurd twist yet. As it turns out, the merfolk that live among the waves turn humans (among other things) into one of them by actually BITING them. Yes, you read that right. The many merfolk in this movie can (and do) sink their sharp teeth into flesh in order to eventually rend people captive to the water forever as one of them, which is even shown in extremely graphic close-up once. In fact, I perhaps could have forgiven the incomprehensible rants of the villagers against the merfolk if just one of them had asked “If these mermaids are REALLY so harmless, then why are so many of us perpetually getting stabbed in the back by these little monsters?” Even worse, the film still remains as cheery and loud as ever even with that, leaving us with something too gruesome for little kids to handle, but way too annoying for anyone but little kids.

All right, now that I’ve got all the bad stuff about this film out of the way, let me briefly touch upon some of the things that I actually liked about it. The animation, though unremarkable when compared to, say, a Hayao Miyizaki film, admittedly is far better than most of the crappy CGI-dependent American productions that we see today, especially in the noteworthy flashback scenes, which are a refreshing change of pace (however brief they may be). And yes, when compared to the endless wave of boring and tasteless CGI travesties out there​, Lu over the Wall actually isn’t that bad of a movie. In fact, it’s most likely the best choice out there when pitted against some load of crap like My Little Pony: The Movie (a film I admittedly have never seen, and hopefully never will). Even so, when compared with masterpieces like Spirited Away or Howl’s Moving Castle, Lu unfortunately more or less winds up second to none.