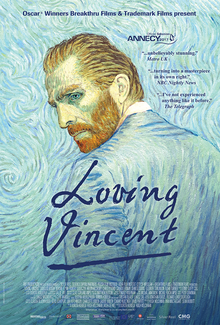 In 1890, Vincent Van Gogh was truly living the high life. He had recognition, talent, fame, and pretty much everything else an aspiring artist around that time could ask for. However, on July 29, he stumbled back to his hotel room with a bullet in his stomach, where he would die two days later. How did that happen? Did Van Gogh shoot himself in a moment of fatal catharsis, or was foul play at work? Loving Vincent, the world’s first oil-painted animated movie, tries to answer that very question.

The film kicks off with the yellow-jacketed protagonist sitting in a café and discussing the nature of Van Gogh’s death with the local postman. When he finds himself with the enormous task of delivering the painter’s final letter to his brother, Theo, he takes it upon himself to find out the true nature of Vincent’s death by conducting a series of interviews with the locals and the ones who were closest to him (including Theo’s daughter).

While I won’t spoil all of the plot and all that happens, I will say that in the film’s (admittedly disappointing) ending, it does sort of state that Vincent killed himself (even saying in a postscript that one of the film’s teenagers claimed that Vincent stole his gun and did so), although it ultimately leaves the real cause of his death ambiguous. It doesn’t really matter how he died, the film seems to say, just as long as he lived a long and meaningful life. After all, he did say that all he wanted to do was touch people. For some people, that might be a satisfying ending, but for other people like me who like their endings more conclusive than not, it definitely won’t be satisfactory. In fact, if you wanted to see the film solely because you wanted to know how Vincent REALLY died, you may even walk out of the theater perplexed, confused, and maybe even a little angry at having spent your money on something that offers no more answers than the average history book.

So if you’re looking for good, solid evidence of how Van Gogh died, the film is obviously bunk, but elsewhere, it is absolutely stunning, especially with its groundbreaking animation, which (as I said before) is completely oil-painted but also involved very heavy rotoscoping (how do you think the 5,000 animators who worked on it made it look so realistic?). Still, as far as narrative goes, the film is almost like an animated JFK, both of which involve a person conducting a series of interviews with a lot of local people to try to piece together the mystery behind a shocking tragedy.

However, while JFK at least seemed to make clear what really happened at the titular person's assassination at the very end through a blow-by-blow explanation (coupled with an extended B&W flashback), Loving Vincent offers not even a remote explanation of the true cause of Vincent’s death, which is by far its most frustratingly flawed aspect. Still, the gorgeous hand-painted animation alone makes it worth seeing, if you don't mind the fairly weak plot.