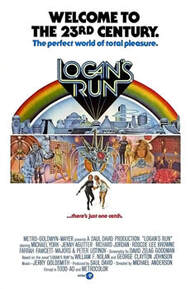 After finally watching Logan’s Run, the fairly unknown dystopian sci-fi flick from the ‘70s that my dad had been wanting me to see for ages now, I have to admit that I was left conflicted. On one hand, I was impressed with the cool visuals and silly-but-interesting premise that can only be summarized as "Brave New World meets The Giver", but on the other, well… as even my dad himself later admitted, it certainly had its “rough spots”, which would be putting it lightly.

In the year 2247, everybody lives in a sterile, highly technological city covered by a big dome in the apparent aftermath of some big global catastrophe. The place is filled with all sorts of pleasures, with everything anyone could possibly want being freely available just about everywhere. There’s only one problem: when somebody reaches 30 years old (raised a tad from the source material’s mere 21), they take part in some bizarre ritual named “Carrousel” that has them lifted up to the ceiling by a force field or something and blasted to death by a laser under the false guise of being “renewed”. Obviously, not everyone wants to do this, so these “Runners” have to be chased down and killed by “Sandmen”, who do this with ease.

One Sandman, Logan 5, is employed by a computer to find and destroy “Sanctuary”, a place where all the Runners that somehow did successfully escape apparently hide out in. While he is talking with this machine, it suddenly changes the color of the crystal on his hand to the one representing “last day” in a process called “retrogram” (yes, I know how weird this all sounds, but just try to follow me here) so he can pose as a Runner himself and successfully infiltrate the place, a mission nobody else can know about for some reason. Coincidentally, Logan himself had just had a change of heart about his way of life after finally realizing that nobody is actually renewed by Carrousel after all, so when he flees the city with the obligatory beautiful female sidekick–in this case, another Runner named Jessica–in tow, he’s not doing it as part of his mission, but because he really does want to just get out of there. Then again, it’s not like that even matters anyway since he’s got everyone trying to kill him before his true intentions are even remotely clear. [SPOILERS AHEAD]

Considering that, why would this (presumably) ultra-advanced piece of technology take the extremely high risk of Logan being obliterated in the first place just so he can somehow find something that nobody even knows the location of anyway? At the very least, couldn’t the machine just have had somebody in the government secretly transport Logan out of the city and then change the crystal in his hand so that little issue would be avoided entirely? On another note, when Logan and Jessica finally escape the dome and emerge into the beautiful open world, why is there still another 40 minutes or so left in the film? What is the old man they encounter in what remains of the United States senate chamber eating to survive, besides (I’m guessing) the dozens and dozens of stray cats living with him? At the very end, just how is Logan able to literally break the aforementioned computer’s system only using his mind, and why does this cause everything in the city to just randomly explo- oh, forget it.

As kinda small and silly as those questions may seem, they are the main reasons my thoughts on the film are so utterly torn. Yes, I gave an 8/10 to The Fifth Element despite its plot also being a bit underdeveloped, but there, it worked just enough to make for a smooth ride for those who just want a bit of dumb-yet-enjoyable sci-fi fun. Logan’s Run is admittedly pretty entertaining when just viewed in that respect as well (in fact, by those standards, it is absolutely amazing), but the aforementioned plot holes, as well as some pretty clunky dialogue and special effects, really prevent this Run from being as speedy as it probably would've been otherwise. Even so, the stunning eye candy in the first half and thought-provoking ideas scattered throughout are cool enough for me to ultimately give the film a slight recommendation to those who really like that kind of stuff, and, along with how it's never really boring, are what ultimately made me decide to give it what you see below instead of a measly 6/10.

Note: The film is also worth watching just to see how much the MPAA’s standards have changed over time: back then, its multiple scenes featuring fully onscreen female toplessness were perfectly acceptable for a PG rating (yes, I know this was way before PG-13 was used, but still), but in this post-Nipplegate era, even the briefest flash of that kind of nudity would get the film slapped with an R whether it was used in a sexual or nonsexual context (Logan's Run had both types). It’s really bizarre when you think about it.