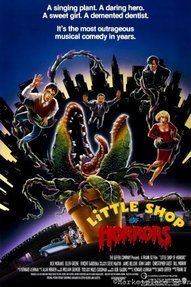 At first, "Little Shop Of Horrors" was little more than a cheap 60's B-flick starring Jack Nicholson. Then, over time, Broadway snapped it up for the stage successfully. However, one day, Frank Oz decided to make a musical horror-comedy based on that play and starring Rick Moranis, Steve Martin, Bill Murray, and John Candy (the latter two in supporting roles). The result would literally blow critics, audiences, and Hollywood out of the water. [NOTE: HEAVY SPOILERS AHEAD]

The film tells the story of a poor shop assistant named Seymour (Moranis), who discovers this odd Venus-Flytrap like plant that won't eat anything. Frantically running around in search of something to feed this sickly plant (which now attracts more prospective customers when put in the shop window), Seymour accidentally cuts his finger on a leftover rose and draws blood. Seeing this, the plant starts making sucking noises, prompting him to put his finger closer to it, where it snaps at his finger. Realizing that the only thing the plant will drink is blood, Seymour lets the plant suck it from his fingers. But soon, it all spirals out of control, as the plant acquires a taste for human flesh and starts eating more and more people (growing bigger all the while), until finally, one night, all hell literally breaks loose, with gigantic plants  (so named after Seymour' high-pitched girlfriend, Audrey) ravaging the streets, devouring everything in sight, until finally, we see a giant one perched upon the Statue of Liberty, and boom, that's the end of the movie (and the Director's Cut version, which I saw at my local theater through Fathom Events).

Of course, that particular ending (which also involves both Seymour and Audrey getting devoured by the plant) didn't fly with test audiences of the time (though when The Director's Cut surfaced many years later with the original ending for the first time at the 50th New York Film Festival, people were whooping for joy at Audrey's and Seymour's demise and cheering on the giant Audrey II), so Oz frantically rewrote the ending so Seymour electrocutes Audrey II and moves in with Audrey to their dream house, yet there's a brief zoom-in on a smiling little Audrey II, and then the credits roll. That made the test audiences happy. However, Frank Oz (the director) didn't feel likewise. In fact, after many years of restorations, recuts, and rebukes, he managed to get his vision of the film (original ending and all) on the silver screen at last. And what an ending it is. OK, fine, it wasn't THAT great (if anything, it's more ridiculous than ever), but at half an hour longer than the original cut, it's certainly a marvel to behold. And as I mentioned before, by the time the Director's Cut surfaced in 2012, people were MUCH more tolerant of more downbeat endings (given the audience's reaction at the New York International Film Festival, it's a wonder test audiences hated it so badly back then).

When it comes to what I think about the film, however, well...it's not really my favorite. You do gotta admit, the plot is kind of stupid. Plus, the songs were too Broadway-ish for me to really enjoy them, though. And because the film is a dark comedy, it tackles mature themes such as domestic abuse and torture (Steve Martin is a sadistic dentist who tortures his parents and beats up and even handcuffs his then-girlfriend, Audrey) in a comedic matter. Oh brother.

Nevertheless, the film was certainly enjoyable, and I loved the supporting roles of Bill Murray and John Candy (as the dentist's masochistic patient and a loud-mouthed radio host, respectively), and even through they appeared only in one scene each, they never failed to make me laugh. And although I didn't really like Steve Martin's character as the psychopathic dentist/abuser, I thought he played the part really well, and you do gotta admit, he was kind of funny in some scenes. Bottom line: The film definitely won't please everyone, but it's a good musical horror-comedy to watch on Halloween night if you want something slightly scary/creepy, but lighthearted enough so you won't be screaming your head off in terror (and, in fact, laughing at the ridiculousness of it all).