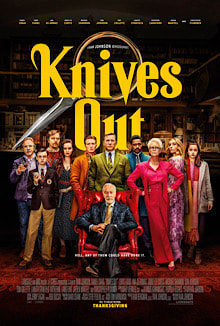 Fun fact: despite obviously being an avid lover of cinema, I actually don’t go to movie theaters that often--most of the time, I just watch films at home with the rest of my family (or even just my dad, depending on what I watch, and when). With most of the ones reviewed on my website ranging from incredibly to relatively old as a result, I realized that that had to change, and fast. And change it did, when I saw Knives Out with my dad in one of our local theaters just yesterday. Judging from the really great time I had watching it, let’s just say that this won’t be the last time I’ll be doing so, especially with an entirely new decade now being upon us. But on to the movie.

Featuring an all-star cast that includes Jamie Lee Curtis, Chris Evans, Christopher Plummer, and Daniel Craig (to name just a few), Knives Out seems to be your typical “whodunnit” mystery-comedy at first: Harlan Thrombey (Plummer), a wealthy crime novelist living in an enormous mansion with his family, is found dead with a slit throat one morning, and everybody seems to be a suspect in the eyes of the mysteriously paid detective Benoit Blanc (Craig, who puts on a bizarre--and incredibly funny--Southern accent for his role). And yeah, the film does remarkably well when initially playing out as just that, but it’s when the many shocking and, yes, unpredictable twists come into play that things really start to get interesting.


However, it’s not just the reveals themselves that elevate Knives above the usual “detective” fare--it’s the masterful way in which they are handled. Instead of constantly throwing them at us, which would only make everything really confusing à la Tinker Tailor Solider Spy, the film wisely spaces them far enough apart to let you really think about them before something else happens. Indeed, this breathing room is something that’s really been missing in Hollywood movies these days, so seeing it used to great effect here is truly a blessing.

Not only do the surprisingly subversive mystery aspects of the film work brilliantly, but also the hilariously dry and self-aware comedy as well. Reader, I am not exaggerating one bit when I say that it had me—and all the other audience members--laughing at a near-constant rate, though the careful way it was used not only didn't deflate the nail-biting suspense one bit, but even amps it up some more in a few cases. For example, without spoiling anything, the way the family reacts to the actual details of Harlan’s will was both hilarious and nerve-wracking in the best ways possible, a description also apt for describing the entire rest of the film as well.

Now, is Knives Out completely flawless? Admittedly, no--though the much-talked about political elements felt a tad forced, I would have personally liked to see the alt-right 16-year old Jacob Thrombey (Jaeden Martell) do more than just blankly stare at his phone all the time. Do these minor rough spots really get in the way of what is unarguably one of the funniest films of 2019? No, no, and no again. Even if this type of genre doesn’t quite pique your interest, you’ll find it impossible to not enjoy this extraordinarily entertaining thrillride of a movie.
​
9/10