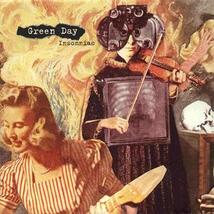 In the wake of sudden success, some artists and bands have somehow managed to release an album that's arguably even better than the one that launched them into the spotlight. Unfortunately, Green Day is most definitely not one of them. Don't get me wrong here: I'm not saying that just because Insomniac, the band's followup to the timeless pop-punk classic that was Dookie, Isn't really quite as good as that particular album, it is instantly bad. It's just the fact that it's only really quite good, period, in a few spots that ultimately makes it as surprisingly disappointing as it is.

At first glance, Insomniac may easily seem like Green Day's In Utero the way Pinkerton was for Weezer, a description that actually seems plausible when looking at its three greatest songs: should've-been-the-opener "Geek Stink Breath", painfully relatable "Brain Stew", and fast-paced "Jaded". So imagine my surprise when I eagerly popped it in only to find out that the entire rest of the album is just a bland rehash of Dookie that doesn’t even try to add anything interesting or memorable to the mix, and the aforementioned choice cuts' brilliance only makes that fact even worse. It may ultimately be enjoyable enough as a better-than-average pop-punk release, but Insomniac is still an excellent example of why it is so important to not automatically assume an album is fantastic just because its biggest hits are.